Cameroon must use dialogue in Anglophone crisis - Commonwealth 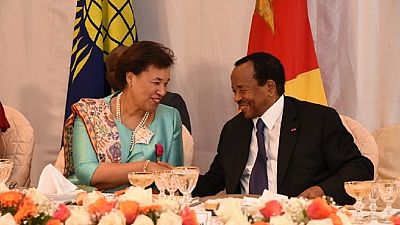 Patricia Scotland, the Secretary-General of the Commonwealth has called on the Cameroon government to employ peaceful and inclusive dialogue to resolve current challenges.

Scotland who is on a five-day working visit to the country met with President Paul Biya at the Unity Palace where they held talks on cooperation between the two parties. She has been in the country since Tuesday (December 19, 2017).

She specifically mentioned the security challenges in the Anglophone parts of the country following which her host asked her to visit Buea to get first-hand experience of the security situation the government was facing.

Cameroon is renowned for its tradition of peaceful and harmonious interactions. So it is with great sadness that we see it in challenging times.

The Central African country is currently suffering from an armed insurgency in its English – speaking regions – Northwest and Southwest, in what has become known as the ‘Anglophone crisis.’

Addressing a cross-section of political and diplomatic actors over lunch, Scotland said “Cameroon is renowned for its tradition of peaceful and harmonious interactions. So it is with great sadness that we see it in challenging times.

“However, as the Commonwealth family, we will do everything we can to preserve the unity and peaceful existence of any member of the family. As we all know, friction and division will not enhance the ability to deliver the peace that each and every one of Cameroon’s citizen wants.

“I therefore encourage Cameroonians from all walks of life to embrace peace, unity and resolve any differences through peaceful dialogue,” the Secretary-General concluded.

Cameroon joined the Commonwealth in 1995 even though it has a dominant French population. It is also part of the International Organization of La Francophonie (OIF) – the French equivalent of Commonwealth led by France.