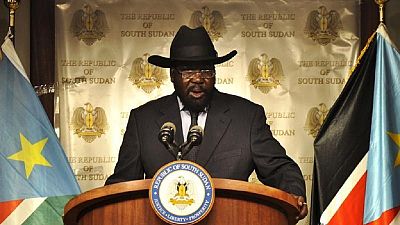 South Sudan denied on Friday that a businessman sanctioned by the United States was an adviser to President Salva Kiir, and said the decision to blacklist him was based on misleading information.

Benjamin Bol Mel was among several individuals from different countries whom the United States placed under sanctions on Thursday.

It said Mel had served as Kiir’s principal financial adviser as well as his private secretary, and that ABMC Thai-South Sudan Construction Company Limited, of which Mel is president, was suspected of getting preferential treatment in government contracts.

He is not an adviser to the president and he should be treated as an individual.

Ateny Wek Ateny, Kiir’s spokesman, said the assertion that Mel had business ties with the president “is not true”, and also denied that there were any official relations between the two men.

“He is not an adviser to the president and he should be treated as an individual.”

Ateny said most of the information the United States used to blacklist South Sudan officials was “misleading”.

South Sudan has been battered by a four-year civil war triggered by a disagreement between Kiir and his then-deputy, Riek Machar.

The fighting has left tens of thousands dead, displaced about a quarter of the population and left the oil-dependent economy moribund.

The U.S. Embassy in South Sudan said on Friday that Mel was being punished for his “role, and that of his business network, in facilitating corruption”.

It said Mel was exploiting his connections with Kiir “to regularly engage in large scale government contracts worth millions of dollars for construction work that was not completed”.