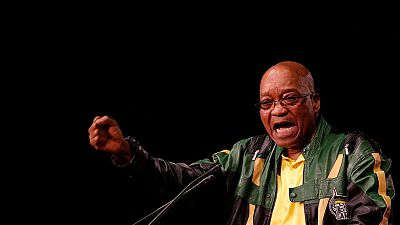 South Africa’s ruling African National Congress holds an election this weekend to replace Jacob Zuma as party leader in a closely fought contest whose winner is likely to emerge as the nation’s next president.

The front runners are Deputy President Cyril Ramaphosa, a former trade union leader and one of South Africa’s wealthiest people, and Zuma’s preferred candidate, his ex-wife Nkosazana Dlamini-Zuma, a former minister and chairwoman of the African Union Commission.

While there are seven candidates in the race to replace Jacob Zuma, it is Ramaphosa and Dlamini-Zuma that are favorites.

Ramaphosa is seen to be an investor friendly candidate and has promised to tackle corruption and restore the rule of law in the ANC, and ultimately in South African government if elected to the highest office in the land.

Dlamini-Zuma on the hand is perceived to be hostile to White dominance of the economy and is running on a ticket of Black empowerment, the same rhetoric that carried her ex-husband Jacob Zuma to the apex of politics in the Rainbow nation.

The stakes are high because the ANC’s electoral dominance means whoever wins the party’s top job is likely become the next president of South Africa after a national election in 2019.

All seven ANC leadership hopefuls pledged to Zuma at a meeting last month that they would accept the outcome of the leadership vote in the interests of keeping the 105-year-old organisation intact and avoid splits that could weaken its strength at the national elections in 2019.

Indeed, the unity of South Africa’s ruling party is in question after a tumultous 10 years of Zuma’s ANC and state presidency that has been tainted by corruption charges and failure to lift poor South Africans, mostly black, out of poverty. The party is now divided along the lines of supporting Dlamini-Zuma who promises to empower black Africans but is seen to be closely associated with the tainted president and the business – friendly Ramaphosa who might put investors interests ahead of those of the majority Black African voters in the ANC.

In the run up to this week’s vote, Ramaphosa edged Dlamini-Zuma by getting the majority of nominations to become leader of the party, but the complexity of the leadership race means it is far from certain he will become the next party leader and therefore the likely next president.

Delegates at the conference are not bound to vote for the candidate their ANC branch nominated.

Zuma said last week he was “very happy” to be stepping down as ANC president. He can remain as head of state until 2019.