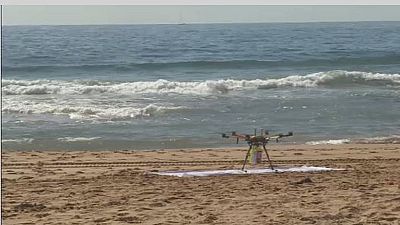 When hundreds of swimmers gathered recently for a swimming race on Bilgola Beach near Sydney, they knew they would not encounter sharks.

The drones use the latest technology to identify different objects in the sea: artificial intelligence, thousands of images and algorithm.

"We can identify 16 different objects, such as sharks, whales, dolphins, various types of boats and many other interesting things,"

The software can make the difference between the different inhabitants of the sea like sharks, which it identifies with a success rate of 90%, against 16% with the naked eye.

“We can identify 16 different objects, such as sharks, whales, dolphins, various types of boats and many other interesting things,” Nabin Sharma, a software designer at Sydney University of Technology said.

“Today was slow, we can actually take a break from someone in trouble – (take) between seven and 15 seconds, so they’re quick, they move at 60kms an hour and we can pull them “ Ben Trollope, a drone pilot said

Surfer Rescue Clubs are institutions in Australia and the shores, where majority of the population lives. The rescuers watch the sea with the naked eye and in case of danger, they go to the rescue of the person aboard dinghies or planks.

Many of them appreciate that this new technology is available for them to be more efficient in their work.

“Sometimes you do not see beyond the waves so the drone is an extra element of safety,” says Bilgola Surf Lifesaving Club President Romilly Madew said.

The drone is also able to drop equipment to people in difficulty, just seconds after finding them.

Some Australian beaches are equipped with anti-aircraft nets, but they do not fully guarantee safety while causing significant damage to marine life, according to a government study released this week calling for their gradual removal.

There have been several attacks of sharks this year. According to experts, incidents are increasing because of the growing popularity of water sports and the fact that some categories of fish are getting closer to beaches. But deadly attacks are rare, 47 in the last 50 years.