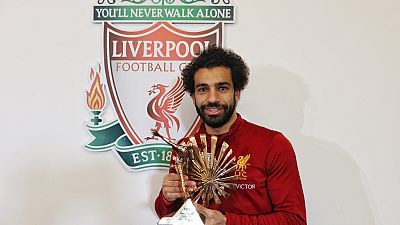 Egyptian international Mohamed Salah says he does not want to be remembered as a national football great, he aims to be the greatest “Pharaoh” – alias of the Egyptian senior national team.

The 25-year-old who plies his club trade with Liverpool was speaking to the BBC after he was announced the broadcasters’ best African footballer of 2017.

“I have always followed my way, and I want everyone in Egypt to follow my way.
Since I left Egypt, in my mind, I want to be the best Egyptian ever. I work hard and try to be different from them.”

He was the Pharaohs top scorer as they qualified for the Russia 2018 World Cup. HE scored seven goals in all including the all important penalty that secured qualification against Congo Republic at home.

The year, however, started with heartbreak for the team as they were beaten by Cameroon in the finals of the last AFCON played in Gabon. At the club level, he has been on form for Liverpool since joining this season.

He has dreams to retain the gong next year. A good season plus a good World Cup outing would just do the trick: “I am very happy to win this award. It’s always a special feeling when you win something. You feel like you did a great year, so I’m very happy. I would also like to win it next year!”

He has had club stints with English Premier League side, Chelsea, before moving on to play with Roma in the Italian league from where he joined Liverpool.

Egypt’s national team is record CAF African Cup of Nations title holders with seven trophies to their credit. The team has churned out many footballing greats as much as Egyptian sides have also flown the flag in intercontinental tournaments.