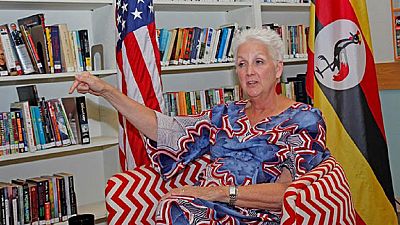 Deborah Malac, the United States ambassador to Uganda has clashed with the government spokesman over the contentious presidential age limit bill.

Malac in an interview with the local newspaper,Daily Monitor, stated that the government had to respect the rights of and accommodate the views of persons opposed to the bill. She is quoted as saying: “to debate, differ and disagree in a non-violent manner” is a basic tenet of a vibrant democracy.

The government spokesman Frank Tumwebaze, however, said it was not for the ambassador to comment on internal political issues of a sovereign country. He pointed her to incidents back in the U.S. where police continue to kill black people.

Her claim that journalism in Uganda is under assault is not only unfortunate but also an act of extreme arrogance.

According to him, Ugandan politics is “none of their business …their aid and trade relations are not conditions for meddling into the internal politics of the country.”

Another area where the two crossed swords was on freedom of the media. Malac is on record to have said that the media was ‘under assault,’ whiles commenting on the recent arrest and prosecution of publishers and journalists over a publication.

She buttressed a position advanced by the U.S. Department of State that it was worried about the case of the Red Pepper Group in the light of media freedoms in Uganda.

The eight accused persons – three journalists and five publishers – have been charged mainly with treason and other offences over a story that said President Museveni planned to overthrow his Rwandan counterpart, Paul Kagame, a claim the government has dismissed.

“Her claim that journalism in Uganda is under assault is not only unfortunate but also an act of extreme arrogance. The decision (the ruling) National Resistance Movement government took long ago to liberalise the media and fully guarantee space for independent press was deliberate and aimed at building our democratic culture.

“That is why we have more than 300 radio and almost 50 TV stations all licensed all over the country broadcasting freely.

“However, when certain actors in the media offend certain established laws and public interest and are charged in court, it doesn’t mean the whole journalism is under attack as she concludes.

“Charging people in court is not an abuse of their rights. Being in court means you have a chance to defend yourself and get justice,” the spokesman’s response to the ambassador read.