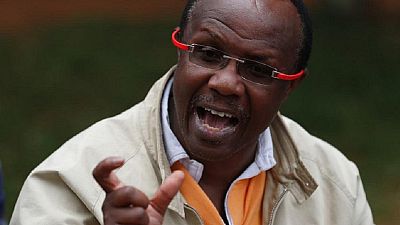 A prominent strategist for Kenya’s opposition who has strongly criticised President Uhuru Kenyatta and called for some parts of the country to secede was released on Monday after being briefly detained on suspicion of inciting violence.

Kenya’s public prosecutor said on Twitter that David Ndii had been released on police bond and that “appropriate actions” would be taken after investigations are completed.

Police had earlier said Ndii, an economist and anti-corruption campaigner who was arrested on Sunday in the coastal town of Diani, was “under interrogation regarding … the offence of incitement to violence”.

“He has committed no crime. (This is) designed to intimidate and fragment the people of Kenya.”

Opposition leader Raila Odinga condemned the arrest, saying on Monday: “He has committed no crime. (This is) designed to intimidate and fragment the people of Kenya.”

“Ndii has been at the forefront of articulating the problems with the way the country is run,” said Gladwell Otieno, executive director of Africa Centre for Open Governance (AfriCOG) in Nairobi.

Ndii is an outspoken critic of Kenyatta, who was sworn in for a second presidential term last week after a prolonged elections season that has disrupted the economy and spurred protests that killed more than 60 people.

A senior policy adviser to the opposition National Super Alliance (NASA), he has called since a disputed August election that was voided by the Supreme Court for western and coastal areas that are opposition strongholds to declare independence.

Odinga, who boycotted a repeat poll in October saying the election commission had failed to carry out sufficient reforms, has said his preference is for Kenya to remain united.

Kenyatta won the re-run election with 98 percent of the vote but the country, a Western ally in a volatile region, remains deeply divided after months of bitter campaigning and sporadic violent clashes.

Salim Lone, an Odinga adviser, said Ndii was helping to organise the “swearing in” of Odinga by a people’s assembly on December 12, Kenya’s Independence Day, a plan that has raised the prospect of further confrontations with security forces.

Ndii’s wife Judith Mwende Gatabaki told journalists on Monday that he was arrested by men who identified themselves as members of the “flying squad” — a police unit that is part of the criminal investigation directorate.

She said they searched the couple’s hotel room before taking him away and that she had been unable to reach her husband since.

“We came here to attend a wedding. There was nothing political about it and my husband is not a criminal,” Gatabaki said.