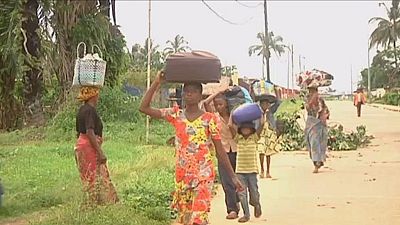 Zambia fears a looming humanitarian crisis after more than 6,000 refugees fleeing turmoil in Democratic Republic of the Congo (DRC) entered its territory.

Thousands of people have been killed and more than one million forced to flee their homes in the DRC’s eastern Kasai region since the start of an insurrection nearly a year ago by the Nsapu militia, which is demanding the withdrawal of military forces from the area.

More than 6,000 refugees were registered at the Kenani transit by November, 100 kilometers from the border with Congo and 1,400km from the capital city, Lusaka.

Water is being provided, health faculties have been erected at the transit center with the help of the Ministry of Health.

Some of the new arrivals linger close to the border to wait for other members of their families to cross over.

Local reports citing arrivals through other entry points say there are more than 8,000 Congolese refugees in Zambia, with the number expected to reach 10,000 in weeks.

According to the United Nations refugee agency, Zambia currently hosts over 60,000 refugees and other asylum seekers, mostly from Angola, the DRC, Rwanda, Burundi, and Uganda.

Kenani transit has been divided into two locations Kenani 1 and Kenani 2, which was set up to decongest Kenani 1 and receive new arrivals.

“Water is being provided, health faculties have been erected at the transit center with the help of the Ministry of Health, and we have partners like UNICEF, we also have partners like World Vision that are on the ground trying to ensure that all necessary requirements to prevent a crisis are being carried out,” said UNHCR Official Abdon Mawere.

Kaimba Kazili lives in Kenani Transit Center with her husband and children. She said she had been fleeing war in eastern Congo since she was a young girl, giving birth to her children in different camps within Congo as the family moved.
“Our children were supposed to be in school from September until December when they close but we are worried that they are being left behind, many will stray,” she said.

The insurgency in the east poses the most serious threat yet to the rule of Congo’s President Joseph Kabila, whose refusal to step down at the end of his constitutional mandate last December was followed by a wave of killings and lawlessness across the vast central African nation.

Analysts fear growing violence in Congo could spark a repeat of the conflicts between 1996-2003, mostly in the east, in which millions died, mainly from hunger and disease.