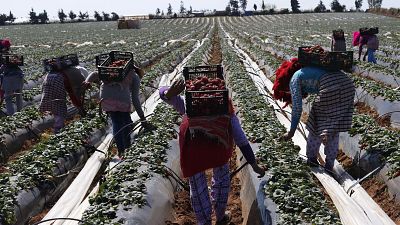 The king of Morocco called for all mosques in the country to pray for rain on Friday, amid a shortage threatening the country’s agriculture, the BBC reports.

King Mohammed VI had issued a royal decree asking Moroccans to “to implore the Almighty to spread his benevolent rains on the earth”.

The lack of rainfall is hindering the country’s seasonal cereal production.
Earlier this month 15 people were killed in stampede for food aid, as costs have risen amid shortages, BBC further reports.

“Water is becoming more and more scarce. We keep having to dig deeper to find any,” said Houcine Aderdour, president of a producers’ federation and an orange farmer in the Souss region of southern Morocco.

The weather has become a major topic of conversation across Morocco, 40 percent of whose population depend on agriculture for their livelihood and where the sector accounts for more than 15 percent of GDP.

“It’s too early to speak of drought. But if there’s no rainfall by mid-December, the situation will turn critical,” an agriculture ministry official said, on condition of anonymity.

On top of the scarcity of rainfall, aquifers have been overexploited for agriculture.

According to local media, royal police aircraft are to inject salt crystals into the clouds to artificially induce rainfall.