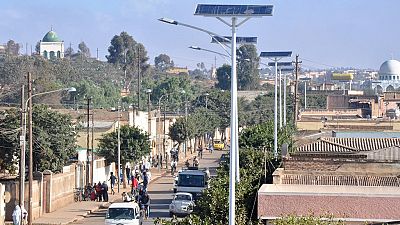 Asmara, the capital of Eritrea has began using solar energy to power street lights, the information minister has disclosed.

According to Yemane Ghebre Meskel, under the first phase of a plan to ensure street lights rely on solar energy, 10 kilometers of road have so far been connected.

He added that the areas targeted for this phase were main arteries and populated suburbs of Asmara amongst others; Idaga Arbi, Akhria, Idaga Hamus and Modeshto.

Asmara was declared a world heritage site in July this year by the United Nations Education, Scientific and Cultural Organization (UNESCO) after years of lobbying. UNESCO described Asmara as a ‘modernist city of Africa.’

Across the continent, solar energy is seen as an expensive option by many governments. The power mix in Africa largely depends on hydroelectric and thermal options.

The most recent talk of solar energy was in Ghana where the Energy Minister in October 2017 said the presidency and parliament were soon going to depend fully on solar energy.

“It makes a lot of sense that in order to utilize our solar and produce the necessary demonstration effect for the rest of the country, that significant buildings adopt solar.

“So the Ministry of energy building, the Parliament House of Ghana and Jubilee House (presidency) must all go solar to send the right signal to the rest of the nation that the government is behind it and that is the proper thing to do,” Boakye Agyarko is quoted to have said.