Zambians mock mayor of capital Lusaka for sleeping in public 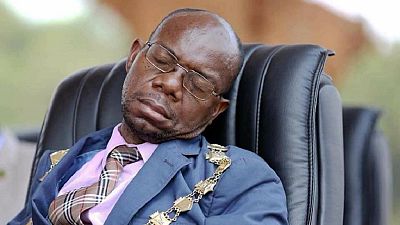 Mayor of the Zambian capital, Lusaka, has become the butt of social media trolls after he was photographed sleeping in public.

The photo which showed Wilson Kalumba, 53, in what was a deep sleep went viral on Zambia’s social media scene – Facebook and Twitter especially.

The photo has sparked social media debate as a number of people are already calling for his impeachment. Others have mocked him for having nothing to do hence choosing to sleep at a public event.

It has gone as far as people questioning why the ruling Patriotic Front chose him as their candidate for the role at a time when a former First Lady, Maureem Mwanawasa, had also vied for the same post.

The 53-year-old has been championing a number of unpopular decisions with respect to running Lusaka.

He is on record to have asked for all demolition of all airtime vending kiosks, deducting talk-time credits to cater for garbage collection and proposing cremation to decongest graveyards.

Ba Lusaka how does it feel to have this guy as your mayor ????? pic.twitter.com/8xaAeogmuk

Someone said the government has introduced sleeping allowance,??? I can't

His tired, everything about Wilson Chisala Kalumba is tired. We understand him :)