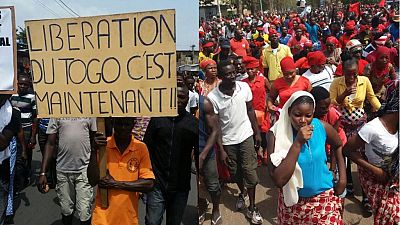 The Togolese government has further appeased the opposition by releasing 42 protesters detained since September and dropped a 2013 arson case against opposition leader Jean Pierre Fabre.

The decision was made hours to the renewed series of opposition protests on Tuesday calling for the return of the original 1992 Constitution that stipulates a two five-year term limit for presidents as well as a two-round voting system.

The government agreed after talks with the protesting parties to ensure their own security in close cooperation with the police during the protests scheduled for Tuesday, Wednesday and Thursday.

They demanded for a dialogue which the opposition stated clearly that it’s not yet ready to sit down with the authorities.

Faure Gnassingbe must learn to respect the people. From the moment this respect is proven, we will think of dialogue.

“Faure Gnassingbe must learn to respect the people. From the moment this respect is proven, we will think of dialogue,” said the ANC communication secretary Eric Dupuy.

He also told local media on Tuesday that the appeasement by the government is a way to delay their protests whose demand included the release of all those arrested since the protests began in August.

“The series of measures taken by the government on Monday is only a delay. It also proves that the case of the fires [against the party leader] is not a legal case but purely political,” he said while demanding the release of six other people in detention over the Lomé and Kara markets fires in 2013.

Last week, the Togolese government lifted the ban on weekday protests and invited civil society groups to observe the protest as well as the withdrawal of plainclothes security officers.

The ongoing protests have been reported to be calm in most of the major cities including Lome where thousands came out to march peacefully carrying placards with anti-government messages.

Sokode, the country’s second largest city recorded some few incidents as the security officials ordered to withdraw from the protests fired gunshots.

This is how militaries start shooting at crowds in neighborhoods to stop them from joining the protest in #Togo #Togodebout #Fauremustgo pic.twitter.com/QN5euhkOIy

The coalition of 14 opposition parties is also calling for the introduction of diaspora voting, launch of an independent inquiry into the deaths of protesters and the delivery of justice, the immediate release of political detainees and the cessation of arrests and persecution.