Niger allows US forces to arm drones in counter-terrorism fight 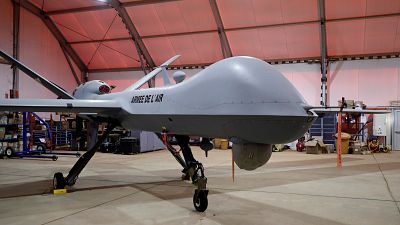 Niger will allow US forces stationed in the country to arm the drones being used to track jihadists, having previously allowed their use only for surveillance, the government said Saturday.

The decision comes a month after jihadists ambushed a joint US-Niger patrol in a volatile area near the border with Mali, killing four American soldiers and four Nigerien troops.

But Defence Minister Kalla Moutari said the decision had been taken before the 4 October attack at Tongo Tongo.

“It was a negotiation that had been underway for a while. Arming the drones is an option we decided on before we learned of the tragedy at Tongo Tongo,” Moutari told state radio.

“We are dealing with very well-armed groups,” he said, and “armed drones are an appropriate and decisive response for fighting terrorism.”

Niger had been reluctant to let either the US or French troops on its soil use the drones as weapons, in part because of fears for civilian casualties.

“There is a possibility of mistakes, but there’s no such thing as a clean war,” Moutari said.

Last month’s attack was the deadliest US combat incident since President Donald Trump took office in January and shocked many Americans unaware of the military presence in the country, which at some 800 soldiers is the largest US deployment in Africa.

On Wednesday, a joint anti-jihadist force linking forces from Niger, Mali, Burkina Faso, Chad and Mauritania began operating with support from the French military, aimed at restricting the freedom of movement jihadist groups have had in the region.

The G5 Sahel’s activities will initially be confined to Burkina Faso, Mali and Niger, where governments have weak control over remote areas.

The United States this past week pledged $60 million to support the counter-terrorism force.