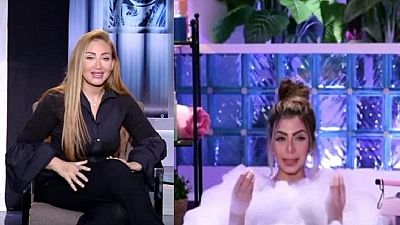 A popular Egyptian television presenter Doaa Salah has been sentenced to three years in prison over a statement she made on her show that was deemed immoral.

A misdemeanor court in Cairo found her guilty of inciting debauchery and sentenced her to three years in prison including a 10,000 Egyptian Pound ($566) fine to be paid to a lawyer who filed the lawsuit against her, reports local news portal Ahram Online.

The episode of her “With Dody” show that got her in trouble was aired on private TV channel Al-Nahar in July when Doaa Salah discussed the choices of women to be single mothers.

The show was suspended for three months by Egypt’s media union which said the discussion “promoted immoral ideas that are alien to our society and threaten the fabric of the Egyptian family.”

The discussion promoted immoral ideas that are alien to our society and threaten the fabric of the Egyptian family.

They also accused her of performing “bizarre and controversial acts” on her programme including wearing a fake pregnant belly and opening her show with a bubble bath in a bathtub.

Another popular presenter on the same channel Reham Saeed was also suspended for three months for discussing extra-marital affairs by introducing a married woman and her lover.

She has also been accused of exploiting stories for attention, resulting in two prison sentences for defamation which she narrowly escaped after appeals.

The head of the media union Hamdy El-Konayissy said in a statement in August that the two presenters discussed deviant issues in Egypt which “breached professional and ethical standards.”

In another discussion on the satellite channel Al-Assema, a notorious Egyptian lawyer Nabih al-Wahsh said women who wear ripped jeans deserved to be sexually harassed and raped.

He made the statement last week as they discussed the law on fighting prostitution and inciting debauchery, local news portal Al Arabiya reported.

Women advocacy groups have condemned his statement and vowed to file a complaint to the attorney general and the media union against Wahsh and the television station.

Last year, the lawyer beat up an imam on live television with his shoes for arguing that wearing a hijab is a choice and not an obligation for Muslim women.