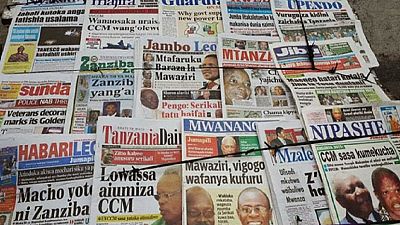 The Tanzanian government has banned another newspaper for 90 days over publications described as false information.

The ban of the Swahili tabloid Tanzania Daima was tweeted by the Director of Information Services Dr Hassan Abbasi who said the paper had “continuously spread false information”.

The newspaper’s editor Martin Malera confirmed the ban to local news portal The Citizen which reports that one of the stories that attracted the ban was published on Sunday with the Swahili headline that meant: “67 percent of Tanzanians use ARVs”.

Tanzania Daima is the fourth newspaper to be banned this year after last month’s 90 days ban of weekly newspaper Raia Mwema over an article that criticized the John Magufuli-led government.

Another weekly tabloid Mwanahalisi was banned for two years after it was accused of inciting violence. It was the second time the newspaper had been closed in three months.

In November last year, Magufuli signed into law a bill that journalists said was aimed at muzzling freedom of the press.