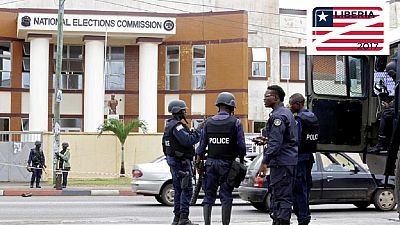 Liberia’s National Elections Commission (NEC) on Thursday released full results of the October 10 general elections. The body further confirmed a run-off vote between the two top candidates for the presidency.

Ex-football star, George Weah of the Congress For Democratic Change (CDC) will face current vice-president, Joseph Boakai of the ruling Unity Party (UP) in a race to succeed Ellen Johnson Sirleaf.

Sirleaf won elections in 2006 to become the continent’s first democratically elected female leader. She won a second term in 2011. She will handover to winner of the run-off – the second president after the end of the 2003 civil war.

The NEC beat the official deadline for the announcement of final results by six clear days. It had till October 25 to announce full results as per electoral laws.

The need for a second round is because none of the candidates got 50%+1 required. It is the third staraight third round scenario. It is Weah’s second run-off from a winning position.

He won the 2005 vote but lost the run-off to incumbent Johnson Sirleaf. Already merger talks have been established by both camps as they move to consolidate efforts towards November 7.