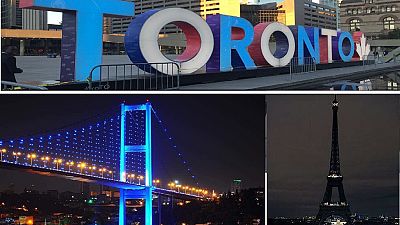 In the wake of deadly attacks on the Somali capital Mogadishu, two global cities have pledged solidarity in different ways. Paris and Toronto have paid tribute to victims of the attack.

The iconic Eiffel Tower located in the French capital announced that it will turn off its light on midnight of Monday to pay tribute to victims of the attack.

[Photos] Somalis in massive clean up of Mogadishu terrorist mess

Tonight, from midnight, I will turn my lights off to pay tribute to the victims of the Mogadishu attack. #EiffelTower pic.twitter.com/hKWCHnMZiS

Following Paris was the Canadian city of Toronto. It’s mayor announced that the Toronto sign was to be lit in the colours of the Somali flag as a show of solidarity with victims of the terror attack.

“The Toronto sign will be lit in the colours of Somalia’s flag today in memory of the innocent victims of terrorism in Mogadishu. Our thoughts are with Somalia,” his tweet on Monday read.

The City of Toronto’s official Twitter handle later shared a photo showing the solidarity measure as stated by its Mayor.

Toronto Sign shines blue & white today in the colours of Somalia's flag, to honour the victims of Saturday's attack in Mogadishu pic.twitter.com/lCreotwq1K

The attack which hit the Somali capital on Saturday has been labeled as the deadliest in Somalia’s history. The death toll is said to have hit 300 and over.

Turkey was the first country to send medical assistance to Somalia. They sent military planes to bring medical supplies and to airlift some of the seriously injured to Istanbul for treatment. Djibouti followed suit on Monday afternoon.

The Somali President, his Prime Minister and other officials donated blood whiles urging nationals to stay strong in the face of the attack.

Even though no group has yet to claim responsibility for the attack, it is largely believed that al-Qaeda affiliated Al-Shabaab have a hand in it. They are the main terror threat Somalia is fighting, they have also carried out attacks in Kenya.