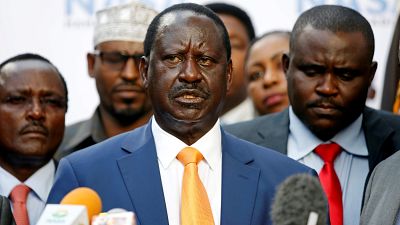 Speaking in London where he was scheduled to give a talk at the Royal Institute of International Affairs at Chatham House, Raila said that the election was manipulated in favour of the Jubilee Party presidential candidate, and the man behind everything was Davis Chirchir, The Standard reports.

The Supreme Court of Kenya declared the results of the August 8th presidential election invalid, null and void, ordering for a fresh election within 60 days.

NASA made public their demands before the repeat election, demands they referred to as irreducible minimums’ which they wanted to be implemented before they could walk into another election. Top of their demands was the removal of Independent Electoral and Boundaries Commission CEO Ezra Chiloba, The Standard further reports.

Chiloba, however, said that he would not step aside and was focused on conducting a fresh election, a statement which did not go down well with the NASA coalition.

They then declared that they will stage countrywide demonstrations until their irreducible minimums were met.

Raila then pulled out of the October 26 presidential poll, saying that the IEBC stonewalled any efforts they had made towards reforms.

President Uhuru Kenyatta criticised Raila’s move, saying that the country had spent millions in preparing for elections and that he cannot just pull out of the race.

Raila, however, remains adamant that he will not participate in the repeat election.

Speaking on Chirchir’s matter, Raila said that the IEBC refused to address how Uhuru’s top agent accessed the IEBC system and manipulated results since he was a former employee of the Commission.

In an interview with a local broadcaster Citizen TV, Raila asked, “Why haven’t you come out and asked clearly if Chirchir deserves to be free or in jail. Should he be walking around majestically behind Uhuru and Ruto and you expect us to feel comfortable before IEBC addresses our issues?”

He then went on to ask for investigations to be done on Chirchir.

Raila is expected to jet back into the country on Sunday, 15th October 2017.