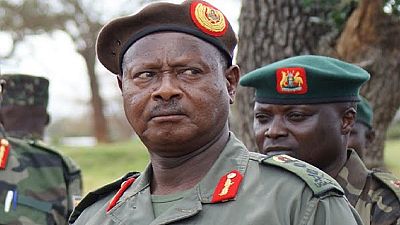 Uganda has frozen a bank account of a prominent South Africa-based pro-democracy organisation, an official said on Friday, a move seen as punishment for its lobbying against a plan to have aging leader Yoweri Museveni extend his rule.

Authorities have cracked down on the media, charities, rights activists and political opposition who have resisted the bid to amend the constitution to remove an age ceiling that was introduced on Sept 27.

Museveni, 73 and in power since 1986, is ineligible to stand at the next polls in 2021 because existing limits cap a presidential candidate’s age to below 75 years.

Arthur Larok, ActionAid’s country director, told Reuters the local unit of Standard Chartered Bank, where the organisation has its accounts, had told them they had blocked the accounts on instruction from the central bank.

“We have been told there are…allegations that we are conspiring to commit a felony and that we are involved in money laundering,” he said.

Days before the bill was brought to legislators, police had raided the offices of ActionAid and another non-governmental organisation opposed to the proposal.

Larok said security detectives have interrogated him multiple times on their activities ever since, adding the freezing of their accounts was likely to be connected to the watchdog’s opposition to the bill.

“From all the interviews I have done with the police, that’s an area they stressed quite a bit,” he said, referring to the planned scrapping of the age cap.

Standard Chartered’s brand and marketing manager Cynthia Mpanga confirmed that ActionAid’s accounts have been frozen but directed any further comment to the central bank.

The Bank of Uganda — the central bank — did not respond to a request for comment.

A parliamentary committee is conducting inquiries on the controversial bill before it is tabled for debate.

The move to allow Museveni to extend his tenure has met broad resistance, including from legislators of his own ruling party.

It has stirred unease among Africa democracy-watchers because it is entrenching a trend in the region, with leaders fiddling with laws to hold onto power after their tenures have hit legal limits.

In Democratic Republic of Congo and Burundi, similar moves have led to unrest.