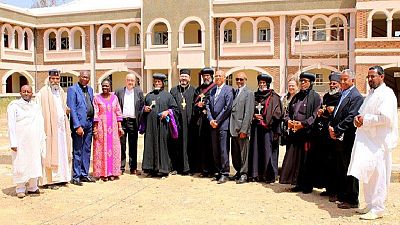 The World Council of Churches (WCC) has said it will pray and work for peace between Eritrea and Ethiopia in an attempt to partake in the resolution of a longstanding border dispute.

This was disclosed by a WCC delegation that visited the Eritrean Orthodox Tewahdo Church last month in what was labeled a historic visit by the body. It was the first time in over a decade that such a visit had been executed.

The delegation was led by WCC programme executive and convener for Africa, Dr. Nigussu Legesse and Fr. Dr. Daniel Buda head of the Ecumenical Relations. They were met at the Asmara International Airport by high ranking officials of the Eritrean Church.

This is a historic visit aimed at reviewing the situation within the Eritrean Orthodox Tewahdo Church and strengthening the relationship that has been loosened over the past several years.

“We came here with great expectations and we are looking forward to having constructive dialogue and encounters with the Eritrean Orthodox Church which is our WCC member church here in Eritrea and with other churches, religious communities and state authorities,” said Legesse during the synod meeting.

What the Ethiopia – Eritrea border dispute is about

Political and security tensions between the two neighbours ocassionally escalates since Eritrea gained its independence from Ethiopia in 1993 over a common border. Their contentious border stretch was the subject of mediation by Morocco in 2000.

The then Ethiopian Prime Minister, Meles Zenawi and Eritrean President Isaias Afwerki signed a border demarcation agreement in Algiers but the terms has yet to be fully implemented. It led to a two-year long war in 1998 which claimed about 70,000 lives.

Eritrea in its address to the United Nations 72nd General Assembly in September 2017 called for an end to what it said was Ethiopia’s continued occupation of sovereign Eritrea. Eritrea described the act as a security risk to the entire Horn of Africa region.

They also asked the United Nations Security Council to lift ‘ueseless and unjustified’ arms sanctions imposed on them since 2009. The U.S.-led sanctions were imposed with the reason that Asmara was supporting Somali-based Al-Shabaab insurgents, a claim they have denied.

About the Eritrean Orthodox Tewahdo Church

The Eritrean Orthodox Tewahdo Church is the biggest church in the country and has some 2 and half million members, with 15,000 priests worldwide including diaspora churches in North America and Europe. The church has eight dioceses in Eritrea and two in the Diaspora.

The Church was recognized by Pope Shenouda III of the Coptic Orthodox Church of Alexandria after Eritrea gained its independence in 1993.

It is an Oriental Orthodox church with its headquarters in Asmara. It joined the WCC in 2003 and is also a member of All Africa Conference of Churches (AACC), and other religious bodies in the Horn of Africa region.

Oriental Orthodox Churches played a strong missionary role during Christianity’s early stages, and have had a leading role in the history of Christianity in Egypt and the northern part of Africa.