Egyptian mummy in Russian museum since 1929 not singer, but castrated man 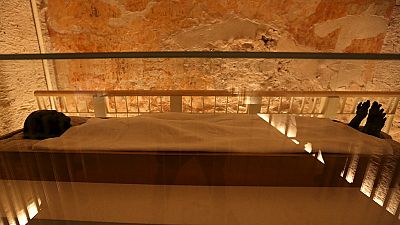 An Egyptian mummy in Russia’s Hermitage Museum since 1929 has been declared a castrated man after an analysis by experts who announced the discovery on Tuesday.

The mummy, who is among the collection of eight displayed at the Saint Petersburg museum, was earlier believed to be a female singer in the temple of Amon-Ra from about 1000 B.C.

“The fact that the man was castrated surprised us a lot, it was not a common practice in Egypt, it is unique,” said Andrey Bolshakov, one of the officials of the museum.

The mummy believed to be between 35 and 40 years old is one meter, 60 inches and was castrated before or after his death, the tomographic examination by the museum and a hospital proved.

“The man suffered from joint diseases but he had very good teeth, without any decay,” Viatcheslav Ratnikov, a doctor who participated in the analysis added.

The Hermitage Museum founded in 1754 is the largest in the world and has eight mummies including two sarcophagi dating from 725-525 BC.

It has more than 60,000 exhibits and nearly three million objects in its reserves.