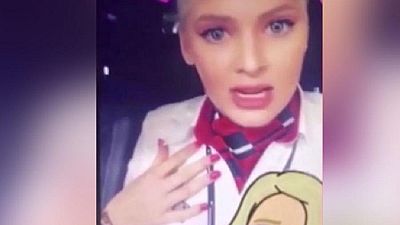 A British Airways hostess has been sacked after a Snapchat video she recorded slamming Nigerian passengers went viral.

Joanne Wickenden, who was wearing her uniform in the minute-long video, was complaining about excessive demands by Nigerian passengers while making references to male genitals.

“All the Nigerians are gonna be there asking for f****** upgrades because they haven’t got enough leg room because their BBCs [term for black male genitals] are in their way,” she said in the video which doesn’t indicate when and where it was shot.

The video was shared by many Nigerians who demanded an action be taken against her. The British Airways confirmed that she had been sacked.

“We expect the utmost professionalism from our staff when they are representing British Airways,” the airline said in a statement.

Below is the video she posted on Snapchat.