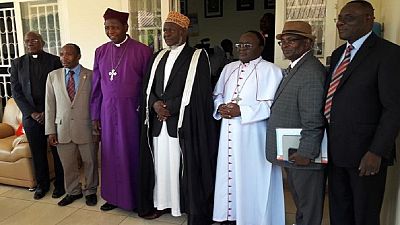 The Inter-Religious Council of Uganda has appealed to the state to allow the decision on the presidential age limit to be made by a referendum.

The council made up of seven heads of the major religious bodies in the country said in a statement last week that the people should be allowed to determine their destiny.

“The debate on the removal of the presidential age limit is not a partisan issue to be monopolised by politicians and/ or Members of Parliament … people have divergent views on the matter, hence the need to soberly listen to all sides without favouring one side and intimidating the other,” they said.

They proposed that a National Dialogue be held on the age limit which should require a referendum to be removed.

They called on the security agencies to “stop harassing one side and favouring another (i.e. those for lifting the age limit and those opposed to it)”.

The Council also called on President Yoweri Museveni to “assert true statesmanship on this matter”.

Statement of IRCU on Age-Limit/ Life Presidency debate raging in Uganda. Had missed it. Thanks for getting on record. irc_uganda ntvuganda pic.twitter.com/SJgMzrGszl