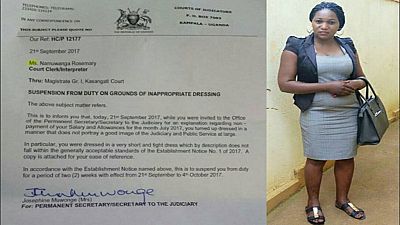 A female court clerk and interpreter at the Kasangati Grade One Magistrates’ Court in Uganda was suspended on Thursday for dressing inappropriately after she demanded an explanation for a delay in her salary payment.

Rosemary Namuwanga was handed a two weeks suspension by the Secretary to the Judiciary Josephine Muwonge for “not portraying a good image of the Judiciary and Public Service at large”.

“You were dressed in a very short and tight dress which by description does not fall within the generally acceptable standards of the Establishment Notice No. 1 of 2017,” it was explained in the suspension letter.

Hahah just when you thought you’d heard it all pic.twitter.com/wqoObztlQl

You were dressed in a very short and tight dress which by description does not fall within the generally acceptable standards of the Establishment Notice No. 1 of 2017.

This letter made the rounds on social media not only for the supposed indecent dress, but for the coincidence that her punishment came after she demanded the payment of her delayed salary for July.

A communications officer at the judiciary Solomon Muyita explained to local media that the court clerk was invited by the Judiciary Secretary after her salary complaint because they found out that she was paid.

He added that when the issue about the dressing came up, she tried to defend it and “talked back in a harsh way”.

Women were required to wear dresses and skirts which are below the knees or at least at knee-length, avoid wearing sleeveless, transparent blouses and dresses, and cover up cleavage, navel, knees and back among others.

Men wear also required to dress in neat trousers, long-sleeved shirts, jacket and a tie. They are also not allowed to wear open shoes nor tight fitting trousers.

With this guideline and looking at her dress below, will you say her punishment was justified?

There should be respect for the work place. Not with you on this one.

Is this really a reason to suspend someone? This is discrimination of the highest order

Had she not posed in front of her mirror that morning?

what is this supposed to mean,excesses of power or simply abuse of office