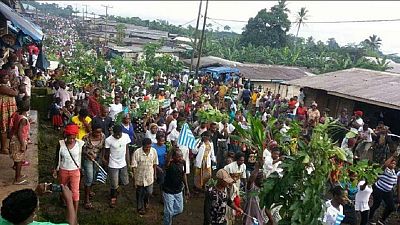 Thousands of demonstrators in several Cameroon English-speaking towns marched through the streets on Friday in protest against the continuous detention of some of the inhabitants of the regions and independence from French Cameroon.

The demonstrations in the North-West and South-West Regions come at the time when President Paul Biya was addressing the United Nations General Assembly in New York.

The demonstrations started in Bamenda in the North-West Region on Friday morning despite a ban on movement of persons imposed on Thursday night by the region’s Governor Adolphe Lele Lafrique following a bomb attack on Thursday that injured three police officers..

Local media reports say security forces were stationed at vantage points in the town and the protesters peacefully waved banners with inscriptions calling for the release of their compatriots and independence.

The demonstration spread to Buea in the South-West Region where women led the march with hundreds behind them carrying leaves, tree branches and flags of the Cameroon separatist movement.

It was the same scene in the towns of Fontem, Bafia, Kumba and Mamfe among others in the same region who are also demanding to be independent from French Cameroon.

Paul Biya’s speech ended without the mention of the Anglophone crisis in the country. This infuriated some protesters who spoke to the media.

Dozens of people from the regions were arrested late last year after the mass protests in the regions against marginalization.