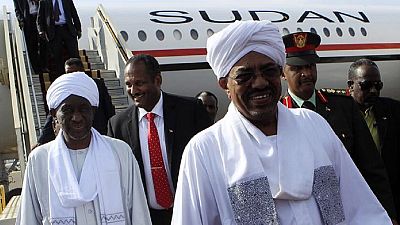 Sudanese President Omar al-Bashir visited the war-torn Darfur region on Tuesday in an effort to show his country is ready to have 20-year-old sanctions lifted by the United States just weeks before Washington is expected to issue a decision.

In July the Trump administration postponed for three months the decision to permanently lift sanctions, setting Oct. 12 as a deadline for Sudan to meet conditions, including resolving conflicts and stepping up its humanitarian efforts.

Conflict in Darfur began in 2003 when mainly non-Arab tribes took up arms against Sudan’s Arab-led government. A joint African Union-U.N. peacekeeping operation, known as UNAMID, has been on the ground for the past decade.

Fighting between the army and rebels in the southern Kordofan and Blue Nile regions also broke out again in 2011, when South Sudan declared independence.

Sudan had announced short-term truces in these regions in June and October 2016, after which fighting eased in Blue Nile and Kordofan but carried on in Darfur. Bashir has extended a ceasefire in response to the U.S. moves.

“After security and stability, comes development,” Bashir said in a speech. He said Darfur’s security has begun recovering and insisted that arms will only be in the hands of state forces.

His decision was delayed for six months to allow Sudan time to meet the conditions which also included cooperating with the U.S. to fight terrorism and improving its rights record.

Gabriel Belal, the spokesman of the Justice and Equality movement, one of the main rebel groups in Darfur, criticized Bashir’s two-day visit, saying it aimed to give a wrong image to the international community that the war was over.

“Bashir’s visit is not welcomed by the people of Darfur because he personally issued direct orders for ethnic cleansing,” Belal said.

“Security, humanitarian and political conditions are tense in Darfur and there’s no prospect for a political resolution.”