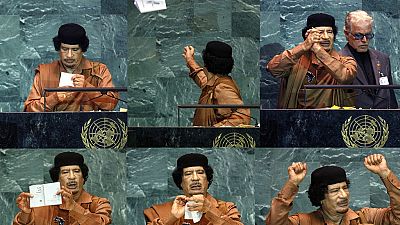 <h3>Former Libyan leader Muammar Gaddafi has made headlines worldwide for so many political and military reasons. One of the most iconic moments is his only address to the United Nations in 2009 during the world body’s 64th General Assembly in New York.</h3> <p>Gaddafi’s appearance was his first in the 40 years of his rule at the time, and he broke protocol by stretching his 15-minute speech to 90 minutes.</p> <p>The then Chairperson of the African Union – who was wearing a brown traditional Libyan outfit with a black African continent brooch pinned to his chest – was introduced as the “Leader of the Revolution of the Socialist People’s Libyan Arab Jamahiriya, President of the African Union and King of African Kings”. </p> <p>It took him 17 minutes to get to his main point calling for an African seat on the Security Council. Waving a copy of the UN charter, he denounced the permanent setup of the Security Council which he says encourages the treatment of other countries as “second-class citizens”.</p> <p>“It is political feudalism for those who have a permanent seat … It should not be called the Security Council, it should be called the terror council. It did not provide us with security but with terror and sanctions,” he said as he ripped a page out of the charter in a show of defiance.</p> <p>“Permanent is something for God only. We are not fools to give the power of veto to great powers so they can use us and treat us as second-class citizens … Veto power should be annulled,” he added before tossing the UN charter over his shoulder.</p> <p>Among his demands, he called for the relocation of the United Nations headquarters to Libya to avoid jet lag and insecurity in reference to the September 11, 2001 al-Qaeda attack in New York.</p> <p>Gaddafi wanted the assassinations of John F. Kennedy and Martin Luther King to be thoroughly investigated and proposed that Israel and the Palestine be transformed into a single state called Isratine.</p> <p>He supported the Taliban to establish an Islamic state and called for the trial of those who “caused mass murder” in Iraq. He questioned the origin of Swine Flu and demanded 7.7 trillion dollars as reparation for colonialism in Africa.</p> <h3>Below is the full speech in video and text. </h3> <style>.embed-container { position: relative; padding-bottom: 56.25%; height: 0; overflow: hidden; max-width: 100%; } .embed-container iframe, .embed-container object, .embed-container embed { position: absolute; top: 0; left: 0; width: 100%; height: 100%; }</style><div class='embed-container'><iframe src='https://www.youtube.com/embed//BKMyY2V0J0Y' frameborder='0' allowfullscreen></iframe></div> <p><em>In the name of the African Union, I would like to greet the members of the General Assembly of the United Nations, and I hope that this meeting will be among the most historic in the history of the world.</em></p> <p><em>In the name of the General Assembly at its sixty-fourth session, presided over by Libya, of the African Union, of one thousand traditional African kingdoms [trans.] and in my own name, I would like to take this opportunity, as President of the African Union, to congratulate our son Obama because he is attending the General Assembly, and we welcome him as his country is hosting this meeting.</em></p> <p><em>This session is taking place in the midst of so many challenges facing us, and the whole world should come together and unite its efforts to defeat the challenges that are our principal common enemy — those of climate change and international crises such as the capitalist economic decline, the food and water crises, desertification, terrorism, immigration, piracy, man-made and natural epidemics and nuclear proliferation. Perhaps influenza H1N1 was a virus created in a laboratory that got out of control, originally being meant as a military weapon. Such challenges also include hypocrisy, poverty, fear, materialism and immorality.</em></p> <p><em>As is known, the United Nations was founded by three or four countries against Germany at the time. The United Nations was formed by the nations that joined together against Germany in the Second World War. Those countries formed a body called the Security Council, made its own countries permanent members and granted them the power of veto.</em></p> <p><em>We were not present at that time. The United Nations was shaped in line with those three countries and wanted us to step into shoes originally designed against Germany. That is the real substance of the United Nations when it was founded over 60 years ago.</em></p> <p><em>That happened in the absence of some 165 countries, at a ratio of one to eight; that is, one was present and eight were absent. They created the Charter, of which I have a copy. If one reads the Charter of the United Nations, one finds that the Preamble of the Charter differs from its Articles. How did it come into existence? All those who attended the San Francisco Conference in 1945 participated in creating the Preamble, but they left the Articles and internal rules of procedures of the so-called Security Council to experts, specialists and interested countries, which were those countries that had established the Security Council and had united against Germany.</em></p> <p><em>The Preamble is very appealing, and no one objects to it, but all the provisions that follow it completely contradict the Preamble. We reject such provisions, and we will never uphold them; they ended with the Second World War. The Preamble says that all nations, small or large, are equal. Are we equal when it comes to the permanent seats? No, we are not equal.</em></p> <p><em>The Preamble states in writing that all nations are equal whether they are small or large. Do we have the right of veto? Are we equal? The Preamble says that we have equal rights, whether we are large or small.</em></p> <p><em>That is what is stated and what we agreed in the Preamble. So the veto contradicts the Charter. The permanent seats contradict the Charter. We neither accept nor recognize the veto.</em> … <a href="url" target="_blank">Click here for the full text of the speech.</a></p>