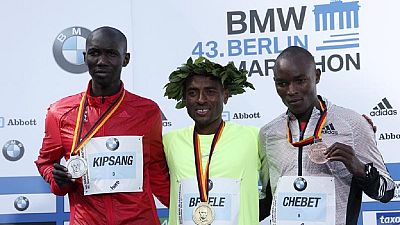 Three of the world’s top marathon runners will compete against each other for the first time when Ethiopia’s Kenenisa Bekele takes on Kenya’s Eliud Kipchoge and Wilson Kipsang at the 2017 Berlin marathon on Sept. 24.

Olympic champion Kipchoge, who has the third-fastest personal best official time of two hours, three minutes and five seconds, is keen to break the two-hour barrier and set a world record.

The 32-year-old came close during the Nike Breaking2 project, when he missed out by 24 seconds at Monza, though his time is not an official world record due to aspects of the event not satisfying IAAF criteria.

It’s a dream match-up. It’s not often that the three strongest marathon men in the world race each other.

Three-time Olympic champion Bekele, who started running marathon events in 2014, also came close to breaking the record in Berlin last year but lost out by six seconds, after being hindered by muscle problems.

The 35-year-old is regarded as one of the best runners of all time and holds the world records for the 5,000 metres and 10,000 metres distances. Bekele has won five World Championship and 11 World Cross Country titles.

“It’s a dream match-up. It’s not often that the three strongest marathon men in the world race each other,” race director Mark Milde said. “As organisers we are crossing our fingers for good weather and thrilling competition.”