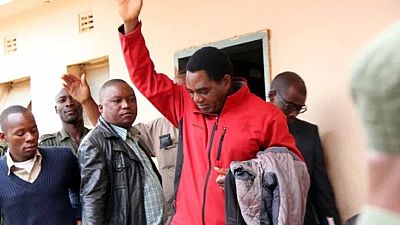 The opposition chief, Hichilema, pleaded “not guilty” to the treason charges and the trial has been set to commence on Wednesday. He has been sent back to prison custody ahead of the next hearing.

Another development was the blanket nab placed on foreign media from covering the proceedings. Hichilema’s party said accreditation for AFP, Reuters, BBC and Bloomberg had been withdrawn. There has not been any official communication on the withdrawal.

The matter has since been adjourned to 9:00hrs on Wednesday 16th August for commencement of trial. #FreeHH

The state will discontinue the treason case in the public interest as both the opposition leader and the head of state are committed to burying their past and starting dialogue envisaged to help address some of the issues the opposition raised after the 2016 elections.

The treason trial of Zambia’s main opposition leader, Hakainde Hichilema, and five others starts today at a High Court in the capital, Lusaka.

The United Party for National Development (UPND) leader and five others were arrested in April and hurled before a Magistrate court on three charges – treason, disobeying lawful orders and using insulting language.

The 55-year-old has been in prison custody for 126 days. The party urged its supporters attending the hearing to be peaceful and decorous.

A journalist at the court tweeted about how filming and taking photos had been banned. Such hearings usually come with heavy security deployment.

At court for the HHichilema treason trial. Filming and taking of photos of any kind around court premises has been banned. #Zambia

The economist was was arrested during a police raid on his home in the capital Lusaka. Hichilema was said to have endangered the life of the president when his motorcade refused to give way to a presidential convoy.

Reuters news agency has, however, quoted top state officials as confirming that the case will be dropped under a deal brokered by the Commonwealth secretary-general, who recently visited the country on “mediation mission.”

“That process of dialogue, which the Commonwealth Secretary-General Baroness Patricia Scotland is leading with the help of Catholic bishops, starts with the release of the opposition leader from prison,” a government source told Reuters on Sunday, referring to local religious leaders.

“The state will discontinue the treason case in the public interest as both the opposition leader and the head of state are committed to burying their past and starting dialogue envisaged to help address some of the issues the opposition raised after the 2016 elections so that the 2021 elections are better held.”

The UPND has denied knowledge of any such move but confirmed that its leader had been transferred from the maximum security jail to the capital to face the charges.

“We don’t have anything on that. We are not privy to the agreement that was entered into between the two leaders and therefore can only wait for tomorrow,” UPND spokesman Charles Kakoma said.

How and why two of three charges was dropped

The state prosecutor dropped the second charge whiles the magistrate struck out the third citing incoherent and untruthful testimonies by police officers.

His lawyers previously said the case should not proceed to a high court because the officer who issued the trial papers had no authority to do so but the magistrate in June this year said the treason case could only be heard by a High Court and gave directions to that effect.

Zambia, a major copper producer has been in a politically tensed state following disputed elections held in August last year.

The UPND have maintained that the polls were rigged in favour of President Edgar Lungu and the ruling Patriotic Front (PF). They have however failed to overturn the results through the courts.