Liberia's only female presidential aspirant still in the running 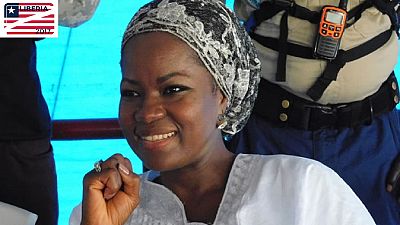 Despite the annulation of her candidacy as the flagbearer of the Union of Liberian Democrats (ULD), Macdella Cooper is still in the running to be Liberia’s second female president under a different political party.

The 40-year-old former model and philanthropist is now the flagbearer of newly certified political party Liberia Restoration Party (LRP) which gained its certificate from the National Elections Commission (NEC) in June.

The LRP had only two weeks after its certification to file nominations. It beat the NEC deadline by electing Macdella Cooper at its convention on July 5, 2017, the party’s secretary general Alfred Gayflor told local media.

This keeps Cooper in the October 10 race despite her appeal of the civil court ruling that annuled the ULD’s convention on April 22 that elected her as flagbearer after a complaint was filed by the party’s previous flagbearer.

According to the complaint, the party’s national executive committee agreed on April 19 to postpone the election due to inadequate logistics and “lack of proper preparation that will provide a level playing field”.

Four days after her election, the court placed a stay order on the entire process after earlier warnings by the court and the country’s election commission to refrain from holding the election.

The warning was not heeded to by the party’s acting national chairman, Solomon Khan who went ahead with the polls that saw Macdella Cooper and other executives elected to lead the party.

Cooper’s lawyers filed an appeal at the Supreme Court.

Macdella Cooper, who is now the flagbearer of the Liberia Restoration Party (LRP) will face 19 men on October 10 including Vice President Joseph Boakai and Senator George Weah.