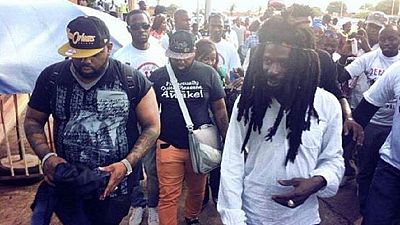 Guinean reggae musician Takana Zion was arrested Tuesday and charged with disturbing public order by a court in the capital Conakry, days after colleague reggae musician Elie Kamano was charged for the same offence.

Dozens of protesters made up of musicians and human rights activists were dispersed by the police with tear gas as they marched towards the city centre to hold a rally.

Takana Zion was also charged for unauthorized assembly and ordered to report to the police twice a week, the lawyer added.

A week ago, reggae musician Elie Kamano was also arrested for leading a similar protest against the president’s third term bid. He was also slapped with the same charges.

According to the authorities, their arrest was due to the fact that they violated the law by not seeking permission for the demonstration.

President Conde’s aide Tibou Kamara said their arrest and charges were not because of the demonstration, but the violation of the law.

Tempers were raised after suspicions that President Conde might want to amend the constitution for a possible third term in office.

Despite denial by the presidency, activists insist he is preparing the grounds to stand again as president at the end of his two-term limit. 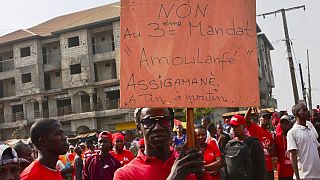 Anti-Conde protests: clashes as Guineans return to the streets

Anti-Conde protests: clashes as Guineans return to the streets