Post-Gaddafi Libya: How the current chaos was birthed 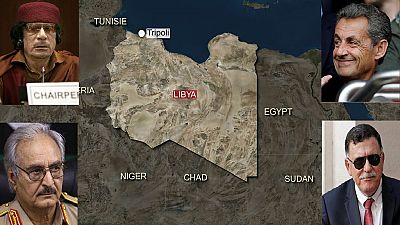 Libya till the 2011 uprising was a stable country that was of importance to the North African region as much as it was to Europe.

Its descent into chaos has emphasized its importance on two fronts – the security threat to the region and surge in migrant waves using the Mediterranean to reach Europe.

The country’s global profile thanks to its former leader was a mix of the good and bad. Across the continent, Muammar Gaddafi, who came to power in 1969 following a coup was seen as a pan-Africanist who had the continent at heart and donated lots of his country’s oil money to others south of the Sahara.

Sarkozy wanted to trumpet the flights he was taking in the air campaign, despite the fact that we had wiped out all the air defenses and essentially set up the entire infrastructure for the intervention.

Political watchers said Libya at the time could not be described as a democracy and after over four decades in power, an armed uprising broke out in February 2011 leading to the fall of the Gaddafi regime, plunging the country into instability.

The rebels though armed did not look a match for the regime forces as the gun and grenade battles raged on. Enter NATO. The North Atlantic Treaty Organization (NATO) led a coalition that entered Libya on March 19, 2011; as part of efforts to help oust Gaddafi.

NATO teamed up with coalition forces primarily enforcing a no-fly zone over Libya. After seven months and after rebels kept capturing major towns including the capital Tripoli, Gaddafi reportedly fled the capital.

He was captured and killed in his hometown of Sirte along with one of his sons. The UN Security Council subsequently voted to end NATO’s mandate days after Gaddafi was killed, on 31 October, 2011.

Libya is currently split with rival governments holding different parts. There is the UN-backed Government of National Accord (GNA) based in Tripoli led by Prime Minister Fayez al-Serraj.

Then there is the Eastern government in Tobruk led by General Halifa Haftar. In the midst of the parallel authorities, Islamic State insurgents managed to take parts of Sirte until national forces pushed them out.

Sarkozy vs Macron: French involvement in the problem and solution

Former French President, Nicolas Sarkozy continues till date to receive flak for his role in the instability in Libya. It was during his tenure that Gaddafi was forced out despite reports showing now that the Libyan leader supported Sarkozy financially.

It is not known what the motivation for Sarkozy was to oust an ‘ally.’ Six years on, another French President, Emmanuel Macron, wants Paris to play a leading role in fixing Libya. The two main rivals recently met in Paris for peace talks.

“There is political legitimacy. That is in the hands of Mr al-Serraj. There is military legitimacy – that of commander Haftar. They have decided to act together. This is a powerful act,” Macron told reporters after the two Libyan rivals shook hands, smiling, in front of cameras.

“They have the legitimacy and capacity to gather around them all those who want to be involved in a political process of reconciliation and construction of peace.”

Macron said on in mid-July 2017 that there would be concrete diplomatic initiatives on resolving the Libyan conflict. The 42-year-old who took over from Francois Hollande, Sarkozy’s successor, says he wants France to play a bigger role in coaxing Libya’s factions to end the turmoil in the north African country.

Two main reasons for Libyan peace is to secure the entire region and root out Islamic State militants and to also combat the activities of migrant smugglers. Paris sees a united Libya as one with a strong central government.

Haftar, who this month declared victory over rival armed groups in the battle for Libya’s second city Benghazi, has refused to accept the government’s legitimacy. He has been gaining ground backed by allies Egypt and the United Arab Emirates.

Serraj is backed by Haftar’s rivals, armed brigades in the western city of Misrata, and by some factions in Tripoli. But he has struggled to extend his government’s influence and faces resistance from some hardliners in the capital.

Former United States President, Barack Obama, is on record to have said the “worst mistake” of his presidency was probably a lack of planning for the aftermath of the overthrow of Libyan leader Muammar Gaddafi in 2011.

Asked by Fox News’s Chris Wallace what he thought was the worst mistake he made in office, Obama replied; “Probably failing to plan for the day after what I think was the right thing to do in intervening in Libya.’‘

Before the Fox News interview, Obama openly criticized Sarkozy and the then UK Prime Minister David Cameron for the chaos in Libya in an interview with the Atlantic magazine.

“Sarkozy wanted to trumpet the flights he was taking in the air campaign, despite the fact that we had wiped out all the air defenses and essentially set up the entire infrastructure for the intervention.

Mr. Obama handed over power to President Donald Trump in January this year. His former Democratic party competitor, Secretary of State and First Lady, Hillary Clinton was beaten by Mr. Trump in November 2016 polls. Obama served as first black president of the US for two terms between 2008 and 2016.