Anger over leaked video of jailed protest leader in Morocco 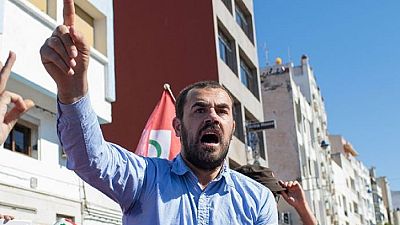 Morocco’s general prosecutor said he would investigate the leaking of a video of a detained protest leader from the northern Rif region that has sparked widespread anger and accusations he had been abused.

Protest organiser Nasser Zefzafi shows his arms, legs and torso to the camera in the video, posted on Monday by a website known for its ties to the security services. The website framed the video as evidence against claims of ill-treatment, but marks and bruises are visible on Zefzafi’s face and lower back.

Within hours, the site removed the video as Moroccans, including some who usually support the government, expressed outrage on social media.

Before his arrest on May 29, Zefzafi led protests against corruption and unemployment in the northern city of Al-Hoceima that have spread to other parts of the kingdom, in a challenge to the government and a monarchy that retains ultimate power. The protests have gathered pace since his detention.

Abdessadak Elbouchattaoui, a lawyer for Zefzafi, said the video constituted “yet another crime” against his client. Elbouchattaoui says Zefzafi suffered physical injuries during his arrest and transfer to prison. The government has declined to comment on the claims, pending an investigation.

Among those criticising the video was Human Rights Minister Mustapha Ramid, who said in a Facebook post that he considered the video “an insult, regardless of the charges against [Zefzafi]”, adding that the “dignity of all Moroccans is a red line.”

General prosecutor Hassan Matar said “necessary legal measures” would be taken over the leaked footage. “The public prosecutor’s office called for a meticulous investigation to elucidate the circumstances behind the video and its publication,” his office said in a statement carried by state news agency MAP.

Morocco’s prisons authority denied the video had been recorded at the Ain Sebaa prison in Casablanca, where Zefzafi is being held. It also announced on Tuesday that it was moving the director of Ain Sebaa as part of a wider reshuffle of prison wardens.

Minister of Justice Mohammed Aujjar did not respond to a request for comment.

The “Hirak” or Peoples’ movement was born after the death of fishmonger Mouhcine Fikri in October, who was crushed inside a rubbish truck trying to recover fish confiscated by police. His death became a symbol of corruption and official abuse.

Demonstrators in Al-Hoceima have vented their frustration over economic and social problems in a kingdom where political protests used to be rare and where the government tries to present the country as a beacon of stability in the region.

Over the weekend, women activists organised demonstrations in Casablanca and Rabat, calling for the release of over 100 people held for their role in the protests.

Several protesters were injured and taken to hospital when authorities dispersed the demonstration in Rabat.