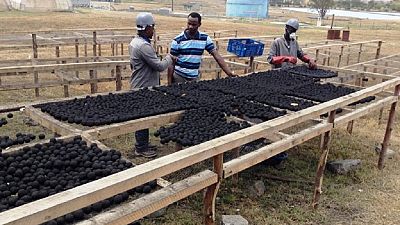 A truck-load of human poo collected around Nakuru, a town in Kenya’s Rift Valley is emptied on to drying beds by workers from the Nakuru Water and Sanitation Services Company (NAWASSCO).

Human waste is the main raw material used at this processing site to make briquettes.

The sludge is left out to dry for 2-3 weeks. The heat in the greenhouse reduces the moisture content from around 95 percent to below 20 percent.

John Irungu is the site manager at Nakuru Water and Sanitation Services Company.

“Carbonisation basically is a process whereby we increase the carbon content of your materials. In this case we are using the drum kiln whereby the sludge is fed, the drum has some holes at the bottom, these holes allows the oxygen to come in, in a controlled manner, that oxygen will only support combustion but to a certain level so that it doesn’t burn completely into ash. In this way, you are able to eliminate all the volatile matters, all the harmful gasses, and it is at this point that you ensure that your sludge doesn’t smell it is safe for handling when you are carrying out the other processes which is milling and briquette production,” he said.

The carbonised materials are then ground into fine particles using a hammer mill, before being mixed together in an equal ratio using motorised equipment.

Molasses is added as a binder, before the mixture is transformed into balls in a rotating drum.

Only 27 percent of Nakuru residents are connected to the town’s sewerage system, highlighting the need for a better way to dispose of the large quantities of human waste generated each day.

Human waste often ends up in storm drains and rivers, or is buried in low-income areas, as well as the nearby Lake Nakuru, polluting the ecosystem.

When ready, the briquettes are put out in the open to dry.

A kilo of briquettes sells for about 50 US cents. The company says they plan to improve efficiency of their plant as demand for the briquettes is growing.

“Our current production capacity is two tons per month, then we want to produce 10 tons per month by the end of this year 2017, eventually move to 10 tons per day once we have the right equipment in place. We are currently in the process of procuring equipment that is the de-watering and carbonization equipment. For dewatering, it’s a modern method of reducing the moisture content in the sludge. This will be able to reduce the moisture from about 85 percent to 60 percent. The sludge will then be dried further inside the solar drier, which will reduce the moisture further from 60 percent to about 40 percent. Then the sludge will proceed to a pre-heater drier to reduce the moisture further from 40 percent to 20 percent or less before it goes to the carbonization machine. The output capacity of the carbonization machine we are targeting at least 10 tons per day which then will be processed into round shaped briquettes,” said Irungu.

The project is supported by SNV Netherlands Development Organisation and the European Union among other partners. It aims to help protect the environment and forests, while improving sanitation.

Residents are able to use the briquettes for cooking and heating. Most say they burn longer and have less smoke compared to charcoal and firewood.

Officials say at first, it was hard to convince the local community to use the briquettes due to the taboo associated with human poo, but residents are now embracing the product.

Grace Waka a trader in the town, uses the briquettes to make snacks for sale.

“It doesn’t have an odour, it cooks well, the fire burns well, You are able to cook fast and the briquettes burn for long. For example if you are cooking 100 chapatis, when you get to fifty you still have a fire unlike charcoal which you have to keep adding after cooking 30 chapatis.

The project is supporting households and landlords to construct more than 6,000 special toilets in poorer parts of Nakuru, as well as in schools, to help collect human waste.

Plans are also in place to replicate the project in other parts of the country.