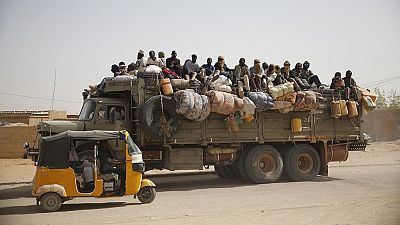 Over 50 African migrants are feared dead in the Sahara desert of northern Niger on Tuesday after being abandoned by their drivers, aid workers and local officials said on Tuesday.

A convoy of three pick-up trucks were transporting over 70 migrants north through the Sahara Desert towards Libya — a typical route for West Africans seeking to reach Europe — when the drivers abandoned them.

Twenty-three of the migrants survived after walking to a nearby town for help, the International Organization for Migration said in a press release on Tuesday, which said the survivors came from Nigeria, Gambia, Ivory Coast and Senegal.

A local official told Reuters that of the remaining 52, at least 15 were known to have died from thirst while attempts on Monday to find the rest were unsuccessful. There was no immediate word on their nationalities.

“The migrants were abandoned about 50 miles from Siguidine,” Fatoumi Goudou, a prefect in the Bilma department of Niger, told Reuters.

It is not clear why the drivers abandoned their passengers, but rival militias and militants seeking money often stop migrant convoys and are a constant hazard for smugglers.

Hundreds of thousands of impoverished West Africans risk their lives crossing the Sahara each year to try to reach Europe, crammed on the back of pick-up trucks and with few provisions to survive if something goes wrong.

It is one of the most dangerous parts of the journey, though the number of deaths in the vast and unpopulated region is hard to track. Some estimate that thousands die each year — more than in the Mediterranean sea between Africa and Europe.

Over 40 West African migrants died of thirst last month in northern Niger after their truck broke down.