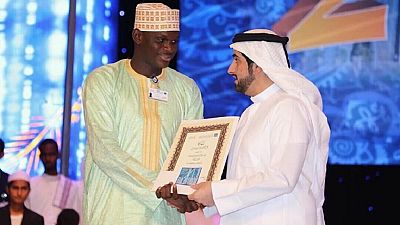 A Gambian has placed third in an annual Quran recitation competition organised by the United Arab Emirates.

This is the same competition a Somali national was expelled from, weeks ago after Saudi Arabia, Egypt, the United Arab Emirates, Bahrain and Yemen abruptly cut diplomatic relations with Qatar.

Ismail Madar, who was representing Somalia, said he was told by the authorities that his participation had ended due to Somalia’s refusal to cut ties with Qatar in the Gulf crisis.

“On Monday evening the competition committee and Emirati authorities told me that i will not take part the remaining competition … I was shocked because I hoped that I will be the winner, but unfortunately this happened to me which is really a punishment,” he told the media.

He was returned to the Dubai International Airport and deported back to Somalia.

The annual Dubai International Holy Quran Award was instituted 21 years ago and more than 160 countries have participated in the contest.

It is held during Ramadan and sponsored by the Dubai government.

90 contestants were selected this year from the 103 qualified participants.

The winner of the top prize of $68,000 was 13-year-old Mohammad Tariqul Islam from Bangladesh and his runner-up, 20-year-old Huzaifah Siddiqui from the United States of America won $54,000.