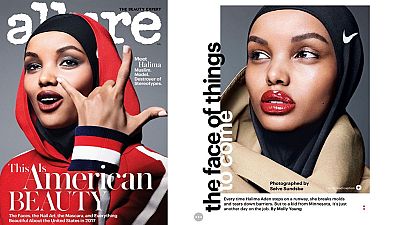 19-year-old Somali fashion star Halima Aden has again made history as the first hijab-wearing model on the cover of the top American women’s beauty magazine Allure.

She donned Nike’s high-performance hijab on the cover of the July issue with the caption: “This Is American Beauty”.

Halima Aden was born to Somali parents at a refugee camp in Kenya and made history in 2016 as the first hijab-wearing contestant in the Miss Minnesota beauty pageant and later in June 2017 made it on the cover of Vogue Arabia.

“I have much more to offer than my physical appearance, and a hijab protects me against ‘You’re too skinny,’ ‘You’re too thick,’ ‘Look at her hips,’ ‘Look at her thigh gap.’ I don’t have to worry about that,” she said in an interview with Allure.

“Society puts so much pressure on girls to look a certain way,” she added.

Aden moved to the United States with her mother at the age of seven and was raised as a Muslim. She told the magazine that she started wearing the hijab at the age of eight by imitating her mother.

“Every little girl looks up to her mom so much – that’s your first hero,” she said.

Halima Aden, who is also a student at the St. Cloud State University, is signed to international model management firm IMG Models and has walked in the Yeezy season five show at New York Fashion Week earlier this year.

From Refugee camp to the cover of Allure_magazine ! Thank you for the opportunity of a life time ! I am so beyond grateful ❤️ pic.twitter.com/BBv8NUFwUF