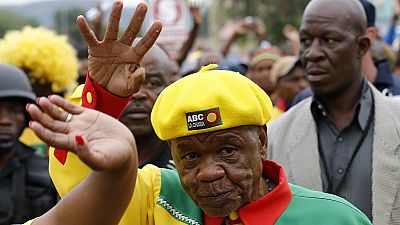 <p>Former Prime Minister of Lesotho, Thomas Thabane has taken the lead in the country’s parliamentary election, according to the final results published on Tuesday.</p> <p>Thabane’s party won 48 seats out of 120, ahead of Prime Minister Pakalitha Mosisili, who won only 30 seats, the Independent Electoral Commission (<span class="caps">IEC</span>) said. </p> <p>Thabane, who made a comeback after a two-year exile, will be charged to form a coalition government in the coming days.</p> <p>“We intend to form a government with the Democratic Alliance, the Basotho National Party and the Reformed Congress of Lesotho,” said Samonyane Ntsekele, Secretary General of the Basotho Convention (<span class="caps">ABC</span>) . </p> <p>“We will make this coalition government official in the next two days,” he added. </p> <p>Thomas Thabane is expected to return to his post as head of government, three years after he was chased out of the country by a failed military coup. </p> <p>In August 2014, soldiers attacked police stations in the capital, Maseru, looted arms and killed a peacekeeper. Fearing for his life, Thomas Thabane fled to South Africa. He briefly returned in 2015 for parliamentary elections where he was beaten. </p> <p>Lesotho, which has been hit by political instability for five years, is one of the poorest countries in the world. </p> <p>It depends essentially on its South African neighbor which provides much of its water.</p>