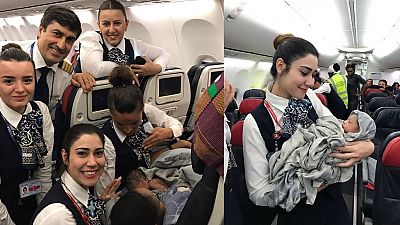 Named Kadiju, the baby brought joy to the faces of the cabin crew even after the Boeing 737 landed at the Ouagadougou Airport in Burkina Faso where the baby and mother were taken to a hospital, Turkish Airline said in a statement.

Welcome on board Princess! Applause goes to our cabin crew! pic.twitter.com/FFPI16Jqgt

“Turkish Airlines’ Ouagadougou station officials reported that the baby and the mother currently do not have any health problems,” the statement added.

This is the second act of kindness exhibited by Turkish Airlines this month after transporting a plane filled with food aid to Somalia to support those affected by the devastating drought.

They responded quickly after French online star Jerome Jarr, together with other celebrities called on the airline to reserve an airplane to transport the relief items since that is the only international airline that flies to the country.

They used the hashtag #TurkishAirlinesHelpSomalia to get their attention and then #LoveArmyForSomalia to gather over 2 million dollars in less than a week.

Turkish Airlines heeded to the call and over a million-dollar worth of food aid was flown to Somalia last week.

THE AIRPLANE FOR SOMALIA IS HERE !!! IT HAS OUR NAME ON IT INCREDIBLE HOW MUCH CAN BE DONE WHEN HUMANS COLLABORATE TOGETHER!! pic.twitter.com/bHwIiK9e4Z