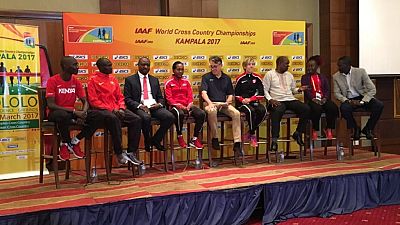 Uganda is hosting the world for the 42nd IAAF World Cross Country Championships which will take place March 26, 2017 at the Kololo Independence Grounds in the capital Kampala.

557 male and female athletes from 60 countries are in Uganda for the event which is being hosted for the first time in the East African country and the fifth time in Africa since 1973.

Kenya and Ethiopia have the most medals won by a country in the competition with 304 and 255 medals respectively.

Ethiopian long-distance runner and current world record and Olympic record holder in both the 5,000 metres and 10,000 metres events, Kenenisa Bekele has the most medals won by an individual in the IAAF World Cross Country Championships with 16 golds, nine silvers and two bronzes between 2001 to 2008.

Another Ethiopian athlete, Worknesh Kidane has the most medals won by an individual athlete in the women’s category including 11 golds, six silvers and four bronzes between 1997 and 2010.

IAAF President Sebastian Coe said on Saturday that it is important to send the event to Africa which has the sport’s greatest talent.

“It is important to take the sport into the heartland of our sport’s great talent. And there is no greater heartland for that talent and the passion for cross country than Africa,” Coe said at a press conference in Kampala.

“This championship will witnesses innovation. I challenged the organising committees to be brave and to think differently,” he added.

“It all began with a dream a few years ago and now it is happening tomorrow … You can experience all seasons in one day,” he added.

Kampala will also make history on Sunday as the first city to start the inaugural mixed relay race to be contested by teams composed of two men and two women who will each run a two-kilometre loop, in any order they wish.

“When the IAAF introduced the mixed relay for #iaafkampala2017, I must say, thank you, this is what brought me back to XC!” – KipropAsbel

Kampala is ready to welcome the world for the IAAF World Cross Country Championshipsiaafkampala2017 pic.twitter.com/C1jYwnSdHw