French campaigners want Barack Obama as their next president 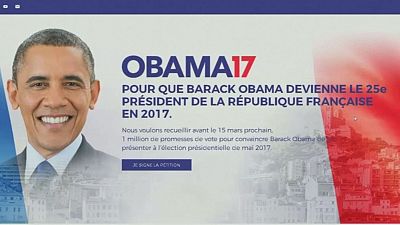 It began as a joke but now its gone viral. Four French friends have launched a campaign aimed at getting former US President Barack Obama to become a candidate in the forthcoming French presidential election.

An online petition has attracted over 40,000 signatures.

Organisers, who hope to garner a million signatures by next month, say the idea reflects their own frustration with the current candidates.

“The idea for Obama 2017 actually came from a discussion over a beer between friends,” said one of the campaigners. “We realised we didn’t want to vote for anyone and especially, we were fed up after years of voting against a candidate instead of for one president whom we really believed in. And so, Obama arrived on the table. We laughed about it a lot in the beginning and then we said to each other that we had to do it for real to denounce all this and that is what we did.”

Another said: ““We like to say it’s a joke but it’s true that it takes root in being fed up. This political defiance of ours, we consider ourselves to be ‘we, the French people/citizens’. We’re worried that it (their current candidates) will lead us to choices that are too radical and that it pushes out-of-the-system-candidates like in the United States, Trump… we don’t want that to happen to us. We can see today that there are leading figures taking power and they are not necessarily the right ones so we said to ourselves, following the example of other movements like Podemos… And actually in terms of etymology we’re quite close: ‘Podemos’, we can, us it’s ‘Yes we can’ which comes from ‘Yes we can’. So it’s the return of the strength of the citizens versus a bit of a dirty political world.”

The organisers say they regularly receive emails from the Americans saying that if they succeed in their campaign, they would move to France.

Their campaign has included the ordering of 500 Obama17 posters, which have been plastered across Paris.