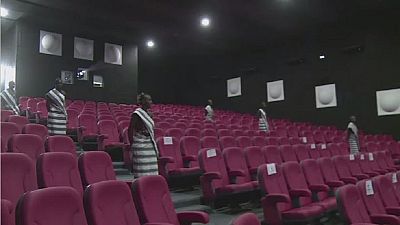 A new cinema hall powered by solar energy has been inaugurated in prelude to the opening of the Pan-African Television and Cinema festival FESPACO.

Called Canal Olympia, this halll is the third largest in Burkina Faso and belongs to Canal Plus owned by French Business magnet Vincent Bolloré.

With a capacity of 300 seats the hall can accomodate other performances and concerts thanks to its large court yard.

“Ouagadougou is the capital of African cinema and Fespaco. We are supposed to maintain the standing thanks to the support from the private sector. This will help Burkina Faso to remain at the centre of its mission and to make sure that it develops and promote African films,” Burkina Faso president, Roch Marc Christian Kabore said.

This inauguration comes at a time when many African cinema halls have closed their doors and many African cities no longer have large screens. The hall will promote Nollywood films as well as movies from FESPACO.

“We will start with an entry fee of about 2 euros that is the official price in all Canal Olympia halls. Later we will see the feedback. But for now people do not seem to have any worries with that,” Corinne Bach, chair of Canal Olympia said.

Promoters says they will also try to satisfy the demands of the public.

Fifty other cinema halls are expected to be opened in Africa in days to come.