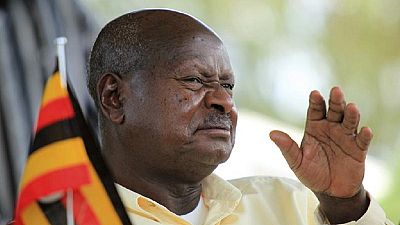 Yoweri Kaguta Museveni, President of Uganda has stated that he is not a servant as many people continue to say and that he was just a freedom fighter, who the people thought could help.

Museveni, one of Africa’s longest-serving leaders has been in power for over three decades. He was addressing party faithful on the occasion of the 31st anniversary of his coming to power.

He won a fifth term in office in elections held in February 2016 on the back of his party, the National Resistance Movement (NRM). A video of him talking about being a freedom fighter and not an employee has been making the rounds on social media.

‘‘If anybody thinks he gave me a job, he is deceiving himself. I am just a freedom fighter whom you thought could help you also,’‘ he stated.

Excuse me, did you say your servant? No please! President Museveni tells off Ugandans pic.twitter.com/C5ce4LVJOu

Museveni recently appointed his son to the position of Senior Presidential Advisor for Special Operations as part of sweeping changes in the Army’s top heirachy. The move however fueled speculation that he is grooming his son to be a successor.

Major-General Muhoozi Kainerugaba, is the eldest son of Museveni. The 42-year-old Muhoozi was promoted to the rank he currently holds last year.

His mother Janet Museveni was also named Minister of Education after her husband started his fifth term in office after winning polls the main opposition says were rigged in February 2016.