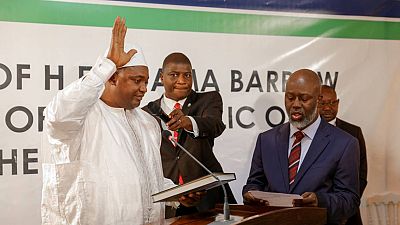 Gambia’s new president Adama Barrow says the country’s economy is his top priority when he returns to Banjul, as he promises a new cabinet and creation of new jobs in a road map to the country’s recovery.

He is due to return to Gambia on Thursday, a senior aide told Reuters.

“He is leaving tomorrow and will arrive in Banjul at around 4pm,” said Amie Bojang

Barrow said: “When we return to Banjul, I intend to set up my office, and as we have opened an expatriate bank, we will receive our technicians so that we can start working. We are in consultations and talks with ECOWAS. Once the situation is calm in Banjul, we will be back as soon as possible.”

“China has a very long-standing relationship with The Gambia, especially during the First Republic, the Chinese ambassador came to see me. We have discussed at length and I believe there will be a lot of trade between The Gambia and China. The Gambia is back, we will be open to the world.”

Barrow also faces tough tasks ahead, among them stabilizing The Gambia and reconciling the population’s desire for justice for alleged abuses committed by the former regime while maintaining peace.