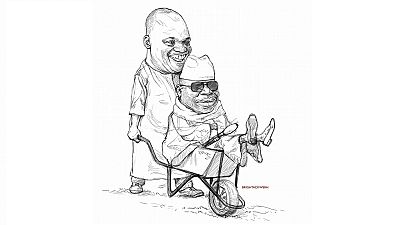 Yahya Jammeh, the former Gambian president may be out of the country but not out of the creative and somewhat subjective even naughty ideas of some African artists.

The pick of the lot was by a prominent Ghanaian cartoonist, Bright Ackwerh, who put Jammeh in a wheelbarrow being pushed by Adama Barrow. The bespectacled Jammeh has an indifferent look whiles a smiling Barrow seems to enjoy pushing Jammeh out.

Ackwerh, who is no stranger to lampooning politicians back in Ghana also has a Jammeh piece that shows the former leader sweating with his wooden staff, Quran and rosary in hand and he titled it ‘I will not be intimidated.’‘

The likes of Obama, Buhari, Melania and Donald Trump have all not escaped his artistic works. He describes himself as ‘‘Le provocateur,’‘ who uses his art ‘‘to generate conversations around cultural capital and identity politics with pop culture.’‘

In the lead up to Jammeh’s acceptance to leave the country he has led for some 22 years till his exit on January 21, cartoonists have put forward their candid views on the ‘Jammeh situation’.

For the better part of it, they mocked Jammeh on different levels, whiles some projected his exile as a source of isolation, others fed into reportage that he plundered the country’s reserves.

Some others mocked his double face – probably inspired by his acceptance and the rejection of election results. Another even likened him to a sticky gum that needed to be scrapped off. His acceptance to leave after ECOWAS threatened to force him out was also highlighted.

Below are a few of those in tweets:

Jammeh took Gambia out of ICC & Commonwealth but forgot to take the country out of ECOWAS that sent him packing. Classic cartoon chrisatuk pic.twitter.com/R9DaMkvyCt

Now Jammeh To RULE for a Billion year..! https://t.co/mS4lDNCFip pic.twitter.com/xiQCLkquWr

This last picture however mocked Barrow who has a female vice president, a first lady and a vice lady. Barrow, a devout Muslim is married to two women. He has yet to return to Banjul after taking his oath of office in neighbouring Senegal. 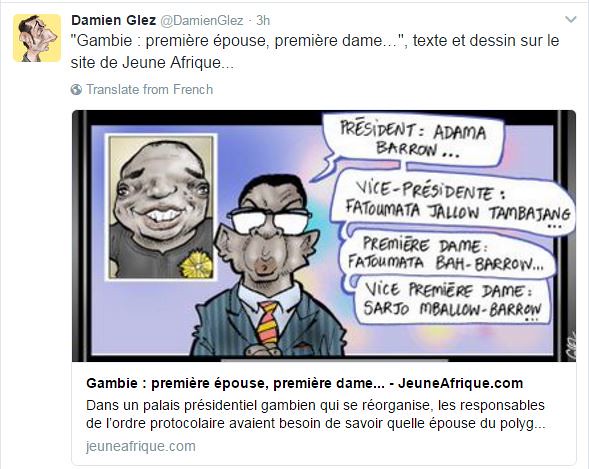