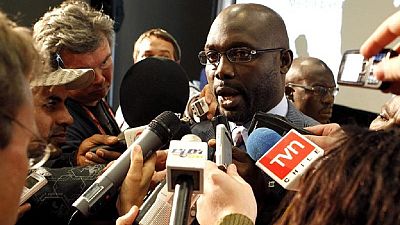 Senator George Weah, African football great and one time world football player of the year will head a coalition in his second attempt to became the president of Liberia.

The West African country goes to the polls in October this year. The winner of the polls will succeed incumbent Ellen Johnson Sirleaf, who steps down after serving two constitutionally mandated terms.

Mr Weah’s first shot at the presidency was in 2005 losing to Sirleaf in the second round of voting. In 2011 he run as a vice-presidential candidate on the ticket of Winston Tubman but that was also unsuccessful.

I am telling Liberians to be hopeful and to keep hope alive. This is our time and we will do all we can this time around to win the elections to lead our people.

In an exclusive interview with Africanews in April 2016, he hinted that he will be a candidate in October 2017 elections.

“I am telling Liberians to be hopeful and to keep hope alive. This is our time and we will do all we can this time around to win the elections to lead our people,” he said on April 28 when he formally declared his intentions.

Unlike in previous elections where he contested on the ticket of the Congress for Democratic Change (CDC) party he founded, this time he will lead a coalition of three parties in a bid to become the next President.

He has always said he sympathises with the suffering of the Liberian masses even though he has been criticised by his opponents as being inexperienced for the top job. He’s currently a senator of the northwestern region of Montserrado.

“I can form cooperation and collaborations for my people to work and I am ready to work. I have done so much for Africa and I think in the governance process I can bring more on the table,” Weah told Africanews in April last year.

Liberia returned to multi party democracy after years of armed conflict that killed tens of thousands, as a result, former President Charles Taylor is serving a 50-year sentence in a UK prison for war crimes and crimes against humanity charges.