France’s top diplomat Jean-Marc Ayrault struck a defiant tone at a summit on Friday with foreign ministers from across Africa as he urged them to show confidence and hope despite the deadly jihadist threat.

With the battle against extremists, the struggle to improve governance and the migrant crisis high on the agenda, ministers from at least 30 nations met in Mali’s capital Bamako ahead of heads of state due on Saturday.

Mali called on France four years ago to help force jihadists out of key northern cities. To this day, 4,000 French troops remain in the country and across the Sahel region.

“(Choosing) Bamako as the venue is an act of confidence after the intervention,” Ayrault told journalists as the summit opened. “Today, we are taking a new step.”

Ayrault urged African nations to deal with the security threats they face but also to look at how development was progressing — and, he said, “to talk about hope”.

Many of the nations taking part were once ruled by France, which in recent years has boosted its military involvement in the continent.

In a bid to help crush the jihadist threat, France has trained more than 20,000 African soldiers every year since 2013, according to a French diplomatic source.

The training drive aims to minimise the need for direct military interventions in African conflicts, such as those launched in Mali and Central African Republic in 2013.

However the situation in key nations such as Mali remains far from stable.

Burkina Faso’s Foreign Minister Alpha Barry said the jihadist threat did not only impact security, but governance and the economy too.

“Terrorist groups operate in several countries,” Barry said. “If we want to attract investment… we have to work on peace and security for our nations.”

Heads of state and diplomats attending the talks will also discuss a string of recent political crises in African nations.

Among them is The Gambia, where President Yahya Jammeh is seeking to stay in power after his December 1 election defeat, despite pressure from his African peers.

Also on the agenda is unrest in Democratic Republic of Congo, where President Joseph Kabila’s refusal to step down has sparked a political crisis.

Analysts however are critical of the French government’s failure to follow through on pledges to scale down alliances with strongman leaders.

Though President Francois Hollande had vowed to put an end to Africa-linked practices branded by critics as neocolonial, the country’s involvement in the battle against jihadists has left his government deeply entrenched in the continent.

“The focus on security has made it necessary to maintain alliances with governments that don’t necessarily have good human rights records,” said researcher Philippe Hugon.

Hugon noted the examples of Chad, ruled by strongman Idriss Deby for nearly three decades, and of west African nations leading the fight against Boko Haram, but which are mired in corruption. 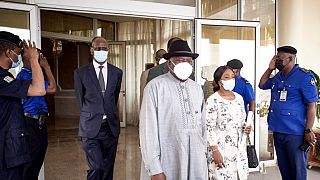