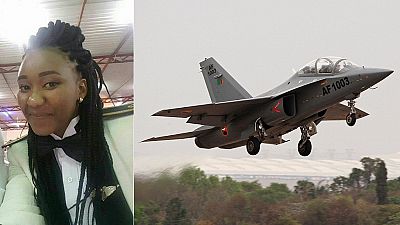 24-year-old Second Lieutenant Thokozile Muwamba has made history in Zambia as the country’s first female fighter pilot to be accepted into the male dominated area of the military.

After joining the military in 2012, Muwamba was fortunate to be part of the Zambian Air Forces programme to train female pilots who will bridge the gender gap in the field.

“Men are not a competition but counterparts that one should work with, and hence women should begin to participate and realise their abilities. Because of this understanding, I am ready to undertake this task ahead of me,” she told local media Times of Zambia last week.

“I look at the fact that when I am in the aeroplane, the aircraft knows no sex as it depends on my input even if I am a woman. I can also give it the right steering for it to respond correctly,” Muwamba added.

Impossibilities can be made possible as long as one was determined to attain one’s goal.

According to Brigadier-General Kapungwe, who is the commander of the ZAF base in Mumbwa, having Second Lieutenant Muwamba as the first female fighter pilot is a clear illustration that women were progressing.

“We want to see more women in the country to become fighter pilots in future,” the paper quotes him.

Second Lieutenant Thokozile Muwamba quit as a first-year student at the Copperbelt University (CBU) to join the military and pursue her dream career of being a pilot.

She owed her success to hardwork, determination and inspiration from her family and instructors.

“Impossibilities can be made possible as long as one was determined to attain one’s goal,” she advised other women.

Africa has only a few female pilots especially in the Air Force.