Half of Africa experienced major protests in 2016 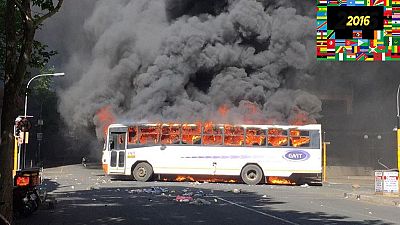 Africa experienced a lot of protests in 2016 sparked by various reasons including salary delays, price hikes, police brutality, unemployment and political decisions among others.

The protests, widely covered by Africanews, were held in each region of Africa and in about half of the continent.

The year started with a month’s strike by teachers in Gabon demanding unpaid salaries for 2014 and 2015 followed by a demonstration by angry residents in west Darfur whose houses were burnt by government militia.

Teacher trainees in Morocco also demonstrated against new recruitment laws while teachers in Ghana were angry about salary discrepancies.

Labour groups were not left out as Ghana’s labour union hit the streets against increment in utility prices and taxes.

It got physical in Tunisia when the police clashed with unemployment protesters and later turned back to also protest over salaries. The unemployment march went south to South Africa where thousands demonstrated for jobs in Johannesburg led by the main opposition party.

Election protests started in the Central African Republic where hundreds called for the nullification of the first round results of the Presidential election.

This wasn’t the same case for Somalia where the people demonstrated against Al -Shabaab attacks killing hundreds of people in the first quarter of the year alone.

Gabonese health workers joined the country’s teachers to strike over unpaid allowances, but that wasn’t the case for the Berbers in Morocco who wanted justice for a student who died during clashes between Amazigh students and those from the Western Sahara.

Zambia was forced to shut down two universities after students engaged in riots over delayed meal allowance while those seeking jobs in Chad hit the streets demanding for jobs.

Tensions and protests heightened in Nigeria between Shi’ites and the security forces estimated to have resulted in the death of hundreds of the religious sect. Egyptian doctors also protested against their country’s security forces after alleged assault of two of their colleagues.

South Africans started the year protesting against President Jacob Zuma in Cape Town with the tag ‘Zuma must fall’. This was followed by protest by students of University of Pretoria who were against the use of the Afrikaans language by some lecturers to teach.

The South African student demonstrations evolved into a protest against high tuition fees and allegations of racism which led to the closure of three universities.

Later in the year, the student protests heightened over fee hike with some lecturers joining in the protest which saw a large number of students arrested and property damaged amid close down of campuses.

Thousands of Burundians staged a nationwide protest against neighbouring Rwanda over what they termed as open aggression after Rwanda planned to relocate Burundian refugees.

For street sweepers in Abidjan, their issue was with the government for not paying their wages while Egyptians directed their anger at the police for shooting dead a 24-year-old taxi driver.

Outgoing United Nations Secretary-General Ban Ki-moon fell out with Morocco after visiting Western Sahara and issuing a statement that resulted in huge demonstrations against the world body.

Cameroon rather fought for justice after a pregnant woman was filmed in critical condition at a hospital where she died unattended to by medical officials. A relative was seen to be delivering the pregnant woman’s stale babies on the floor.

This strike was followed by xenophobic attacks in Zambia and South Africa. That of Zambia was against Rwandans accused of ritual killing while that of South Africa was against foreign nationals due to lack of jobs.

Kenya’s opposition engaged in a series of demonstrations against its electoral body accusing it of being in favour of the government. The police used force to disperse the protests resulting in a few deaths and injuries.

It was rather peaceful as thousands took part in pro-cannabis protests in South Africa as well as protests by South African taxi drivers against Uber.

Malians marched against ‘corruption’ and ‘bad governance’, and the demolition of shacks in Pretoria sparked riots.

It got bloody when Biafra activists clashed with Nigerian security in a protest for equal rights while Zimbabwean civil servants strike over unpaid salaries. This was followed by taxi drivers who engaged in a violent protest against police corruption in Zimbabwe.

Angry Kenyan protesters also burned down crime scene where a murdered human rights lawyer and two others were kept before they were suspected to have been killed by police officers.

Ivory Coast also witnessed clashes between university students and the police during a protest against poor conditions on campus and other concerns. This followed protests in Juba against planned deployment of AU forces to South Sudan.

Thousands of Moroccans demonstrated in Rabat against a new law raising the legal age of retirement for civil servants.

Ethiopia also followed with tens of thousands of protesters in the Oromia and Amhara regions calling for a regime change. This led to a series of violent protests that spread to other parts of the country. Many people died and several arrested.

Burundians hit the streets again to denounce a UN report accusing the Burundian government of carrying out human rights abuses, while students and teachers in universities in Niger embraked on a strike action over non-payment of salaries and grants.

Congo’s public university students and lecturers also embarked on strike over unpaid allowances and a University of Lagos student protest against the rustication of some student union members forced a shut down of the institution.

Burkinabes took to the streets to demand the release of ex-minister who was detained over coup allegations.

But in Ivory Coast, the opposition demonstration against the new government-proposed constitution was dispersed and several opposition leaders arrested by the police. Ivorian civil servants also joined teachers to strike against pension reform.

The two anglophone regions of Cameroon also witnessed some protests including teachers and lawyers going on strike accusing the government of trying to marginalise them by imposing the French language on their schools and courts.

At the end of the year, protests in the Democratic of Congo against President Joseph Kabila’s stay in office were shortlived after successful negotiations by Catholic bishops.