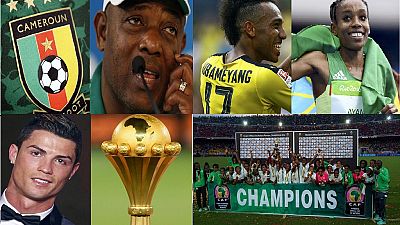 The sporting year across the continent was one of awards, Africa also made strides during the Rio Olympic games but there were also deaths and a measure of uncertainty over Gabon’s hosting of African Cup of Nations (AFCON).

The uncertainty was due to political developments after August presidential polls, then there was eventually a draw – Africa is now a matter of weeks from the (AFCON).

But long before the AFCON draw, in January, the Confederation of African Football (CAF) awarded the top footballer accolade to Gabonese skipper and Borussia Dortmund forward, Pierre Emerick Aubameyang.

He beat Ghana and West Ham’s Andre Dede Ayew and former Ivorian skipper and Manchester City midfielder, Yaya Toure – who at the time was the reigning champion. The event was held in Lagos.

Aubameyang is still up for the defense of the accolade in January. He faces a new set of challengers, Senegal and Liverpool’s Saido Mane and Algeria and Leicester City’s Riyad Mahrez.

After the political uncertainty in the Gabon, the draw for the AFCON was successfully held. The competition kicks off on January 14 and ends on February 5, 2017.

There are four host cities (Libreville, Franceville, Oyem and Port Gentil) as Gabon seeks AFCON glory at home and as Ivory Coast attempts to successfully defend their trophy despite being without the Toure brothers – who retired after 2015 and injured skipper, Yao Gervinho.

The groupings are as follows:

The Olympic Games in Brazil was yet another opportunity for countries on the continent to rub shoulders with others across the world. There were disappointments here and there but there were also highs among which were:

The Ivory Coast won their first gold medal at the Games thanks to taekwando which won them two medals. Cheick Sallah Cisse kicked his way to the top in the men’s under-80 kilograms taekwondo final. Ruth Gbagbi also winning the bronze medal in the women’s under-67 kilogram class.

The IAAF recently named Almaz Ayana as its best female athlete with the best male category going to Jamaica’s Usain bolt who set a triple Olympic record by sweeping three golds in Rio. Bolt added 100m, 200m and 4×100m golds to his 2010 and 2014 medals.

FIFA’s appointment of Senegal’s Fatma Samba Diouf Samoura as its General Secretary was another top sporting highlight for the continent. Samoura joined FIFA after over two decades of work with the United Nations.

The announcement was made at the 66th FIFA Congress in Mexico City where Infantino praised her for her integrity saying the Council was particularly “impressed with her operational experience, as well as her expertise in governance and working in multi-cultural environments.”

In some international sports headlines, Real Madrid won their 11th Champions League crown beating Athletico Madrid for the second year in a row.

Ronaldo went on to inspire Portugal to glory in the Euro 2016 champions held in France. The Portuguese defied history and form guide to beat the Les Blues by a lone goal in the final. Guinea Bissau born Eder grabbing the winner, he came on as a substitute for injured Ronaldo.

Mahrez went on to be named the Professional Football Association’s players’ player of the year. He was also recently awarded the BBC African footballer of the year award beating Saido Mane and Aubameyang of Senegal and Gabon respectively.

Deaths and other African news round up

Other issues relating to sports were of deaths, the worst hit being Cameroon football. The country had barely finished mourning the death of Patrick Ekeng Ekeng who died whiles playing for his club Dinamo Bucharesti in Romania.

A Nigerian footballer was also reportedly shot dead by security officials in the country’ south but he will not be as remembered perhaps as a former medal winning coach and player of Nigeria, Stephen Keshi, who also died this year. Shaibu Amodu, another Nigerian legend also died this year as did Ivorian Laurent Pokou.

SUGGESTED READING Who is Stephen Keshi?

Mamelodi Sundowns came through the a strange route to be crowned CAF Champions League winners while the DRC for all its political issues had the triumph of TP Mazembe to celebrate as the Katanga province side annexed the CAF Confederations Cup.